What color T-shirt are you wearing tomorrow?

By Laura Kiritsy and Ben Klein
Today, folks across the country are wearing purple clothing and tinting their social media profile pictures with similar hues to mark Spirit Day, a day for people to stand up against bullying and to show their support for LGBTQ youth. Spirit Day is a great way to raise awareness of the scourge of bullying and the way in which it disproportionately affects queer youth.  But we have been asking ourselves this week, “What more should we be doing for LGBTQ youth?” and “What more can we ask our allies to do?” Let’s not shy away from taking advantage of these awareness days to demand support for tangible changes that will really make the world a safer, more affirming place for LGBTQ youth.

That’s not to say that we don’t have the Spirit Day spirit. Here at GLAD, a group of purple-clad colleagues gathered for the picture that now graces ourFacebook profile page. Our FB and Twitter icons are purple. And we’re proud to say that we put our spirit into action every day in an effort to make the world a safer, more affirming place for LGBTQ youth, whether it be litigating on behalf of a transgender girl who was discriminated against at her school or educating students about their legal rights as LGBTQ people, to cite just a couple of recent examples.

Bullying is a widespread problem with tragic consequences, as we have seen with the painful suicides of too many young people like Carl Walker-Hoover (who lived in Massachusetts), Asher Brown and Tyler Clementi. And at this point, it’s safe to say that support for curbing school bullying is a mainstream position. All of the major sports leagues –including NASCAR -- have “gone purple” today. The iconic “Welcome to Fabulous Las Vegas Sign” has been turned purple along with the Duke Energy Tower in Charlotte, North Carolina, the New York Stock Exchange, Thomson Reuters’ Times Square screen, the LAX Pylon Lights and JFK Airport traffic tower. The list of celebrity purple people is endless. (Yes, we’re well aware of the right-wing cranks that see anti-bullying efforts as veiled attempts to promote the dreaded “homosexual agenda,” but they’re being pushed to the fringe, as CNN anchor Christine Costello’s recent interview with the American Family Association’s Bryan Fischer clearly demonstrates.)

If we’re really intent on creating a better world for LGBTQ youth we should be raising awareness of a whole spectrum of issues that affect them.  Here are some issues that we think are just as important: 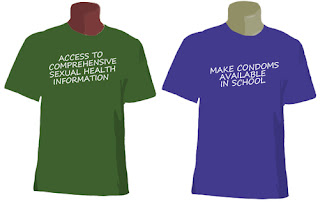 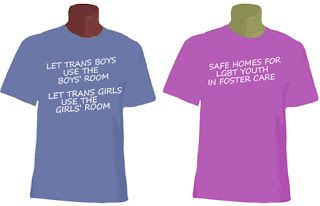 What are your ideas for raising the bar on supporting our young people?
Posted by GLAD at 3:19 PM No comments:

‘Transgender Exceptionalism’ in the Kosilek Case


The online legal publication JURIST published a very thoughtful piece by Jennifer Levi, the director of GLAD’s Transgender Rights Project, on the recent ruling in the case of Michelle Kosilek, a transgender inmate who has long sought treatment within the Massachusetts Department of Corrections for her Gender Identity Disorder. A recent ruling in her favor generated an angry outcry from politicians and the public who don’t believe a convicted murderer should be receiving sex reassignment surgery at taxpayer expense.

Jennifer argues that no matter the controversy, there is no place in our system of laws for “transgender exceptionalism.” As she writes:

Properly understood, this case is not about the legitimacy of medical care for transgender people or the baseline of care that has to be provided to prisoners to ensure that we retain our position as a civilized society. Indeed, the Commonwealth itself has publicly disclaimed any challenge to the underlying legitimacy of the condition of GID or the need for its care and treatment in the prison setting.

I hope you’ll take a few minutes to read Jennifer’s piece. I guarantee it’s more informative than all of the thousands of news pieces that have been generated in the wake of the ruling combined.

Posted by Laura Kiritsy at 3:11 PM No comments:


This post was penned by Tabias, one of our fabulous interns

When thinking about the meaning of “LGBTHistory Month,” as with other designated months (Black History Month, National Hispanic Heritage Month, Native American Heritage Month, etc), I almost always have the same gut reaction. This has less to do with the successes of these individual groups, many of which I proudly belong to, than it does with the idea that our histories and triumphs exist in a vacuum, independent of each other. Our siloed months of celebrations leave unsuspecting celebrants to believe that there are quite distinct communities in this nation when, in fact, our triumphs and our identities have always intersected. Deep within our souls we all know that LGBT History Month has always been Black History Month, just as it has and will always be Native American Heritage Month, Women’s History Month and so forth. My point here is that in our zeal to identify primarily, or at least visibly, with particular portions of our identity we must always remember that our identities form and reform each other in particular, known and unknown ways. We must remember that our greatest call in life is not simply to love each other, but to recognize the complexities of living, being human, and loving through the (mis)understandings. Our greatest, most confounding strengths lay in our diversity of experiences, traditions and ways of knowing.

Now that I’ve said all this, let us celebrate how far we’ve come.

AIDS Project Worcester celebrated their 25th anniversary last night with a lovely dinner at the College of the Holy Cross.  Attendees remembered APW Executive Director Joe McKee, who died in April, and honored those who continue Joe's work.  Among the honorees was GLAD's own  AIDS Law Project Director Ben Klein, who received the Outstanding Advocate Red Ribbon Award.

The award marked Ben's many accomplishments advocating on behalf of people with HIV, not the least of which was his Supreme Court win in Bragdon v. Abbott, establishing that people with HIV are protected from discrimination by the Americans with Disabilities Act.

Ben is extremely modest, but there is always a little intake of breath in a room when people are told - or reminded - that he is a Supreme Court victor.

Another Victory in the Fight for Fairness for Our Families 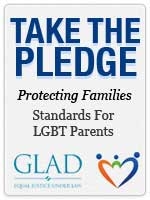 At the risk of sounding like a broken record, I’d like to draw your attention to a great ruling issued last Friday by the Massachusetts Supreme Judicial Court (SJC) in our case A.E.H v. M.R.

This case was yet another example of a bad breakup between a same-sex couple where one of the estranged spouses attempted to rewrite their family history in order deprive our client of a relationship with one of her two daughters. Those of you familiar with this blog might know I have strong feelings about people who try to wield our country’s woefully inconsistent – or nonexistent, in many places – state laws governing the recognition of LGBT familial relationships for their own gain in custody disputes. Fortunately, at least here in Massachusetts, such behavior is increasingly becoming legally out of bounds.
GLAD represented A.E.H., who entered into a registered domestic partnership (RDP) in California with M.R. in 2003. The couple agreed to conceive and co-parent children together, and they later moved from California to the east coast when M.R. was pregnant with their eldest child, J. J. was born while the couple lived in Massachusetts, and M.R. and A.E.H. were equal co-parents, acting as a family in every way. The couple decided to expand their family, and A.E.H. became pregnant with their second child, M. During A.E.H.’s pregnancy, M.R. took J. to Oregon under false pretenses and severed all contact between J. and our client.

California RDPs offer all of the benefits, protections and obligations of marriage in that state. That means that both parties in an RDP are the legal parents to any children born into that relationship. Despite that reality, M.R attempted to make the case that our client was not a legal parent to J. because their RDP is not equivalent to marriage in Massachusetts. The Massachusetts Probate and Family Court, however, appropriately recognized both women as legal parents to the children.

The trial judge then determined that awarding physical custody of both children to A.E.H. was in the children’s best interest, citing M.R.’s disruption of the strong emotional bond A.E.H. had formed with J. over the course of parenting her from birth until she was 15 months old, at which point M.R. took off out of state with J. The trial judge also noted that M.R. engaged in a pattern of behavior that attempted to alienate J. from A.E.H., such as prohibiting contact between the two until court-ordered to do so, telling J. that A.E.H. was not her parent, but rather a friend; and asking the court to order that A.E.H. not refer to herself as “mommy” during web chats with her daughter. The Probate and Family Court also found that A.E.H. provided more stability to J. than M., noting that when M.R. moved out of state with J., the child lived in four different homes in less than a year and had “no less than five different care providers.”

M.R. appealed the ruling to the SJC and continued to argue that Massachusetts should not recognize their California domestic partnership, and as such she should retain sole custody of the older child she birthed and have no parental responsibility for the younger child that A.E.H. birthed.

If you’re familiar with my other posts on these types of cases, you know how this one’s going to end: with my plug for the publication Protecting Families: Standards for LGBT Families , a collaborative effort between national and local LGBT organizations spearheaded by GLAD. The standards are a set of 10 guidelines that aim to remind LGBT people how important it is to legally protect the families they create and to caution parents against wielding anti-LGBT laws and other legal loopholes against their partner should their relationship break up. Until our families are uniformly recognized, respected and protected in every state in our country, sometimes the best we can do is to urge our community to fight fair. We know breaking up is hard to do (that’s the title of Standard #6, as a matter of fact). For the sake of the children involved, it should at least be fair, and reflect the reality of our lives and our relationships.

Oh and one last thing – shout outs to former GLAD Senior Attorney Karen Loewy, who expertly argued this case before the SJC back in May, and Polly Crozier of Kauffman Crozier LLP, who tried the case and served as co-counsel on appeal. Congratulations on an important victory!
Posted by Laura Kiritsy at 1:19 PM No comments: