A Moment of Celebration in Connecticut 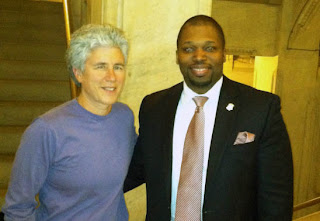 I don’t know how else to describe how I felt. Last night, after five-and-a-half excruciating hours of hearing the Connecticut House of Representatives debate the value of transgender people’s lives and whether we are worthy of the law’s protections, the chamber voted on HB 6599, a transgender non-discrimination bill. I ran upstairs to the viewing gallery to try to count votes being cast and projected up on the board. I knew we had to get to 76.

About three hours earlier, we had narrowly defeated a bathroom amendment that would have carved out exclusion from the law’s protection for transgender people in bathrooms (Don’t they know we have to go, too?). That vote was 62-65. We needed more than 65 to get this bill passed. Way more. Eleven doesn’t mean much in cents, but it’s a big lift, a huge lift, in votes. I didn’t know how many we’d get on the bill, now up for a vote. I started to count.

There had been a huge volume of floor speeches in opposition to the bill over the last five-plus hours. Frankly, it made me slightly nauseous to hear so many legislators speak so candidly about their discomfort with the bill and transgender people. For six years, the community has been working on this bill, bravely speaking openly about our lives and trying to educate anyone willing to listen.

Finally, the speeches in support of the bill came. Representative Richard Roy of Milford spoke. I wasn’t sure as he began whether he was speaking in support or in opposition to the bill. Suddenly, I heard these moving words about an experience in his family of a cousin who had recently transitioned from male to female. He talked about the compassion he had for someone he loved whose experience he may not have understood but for whom his love and admiration had remained steadfast. He said he had to support the bill. That he’d be a hypocrite if he voted in opposition knowing how brave and courageous this family member had been sharing her experience of transition in an exchange of Christmas cards. I dared to be slightly hopeful about the prospects of passage.

Then Representative Kim Fawcett began to speak. She is a Democrat but had not been a supporter of marriage equality. The issues are, obviously, very different but it has become hard to imagine that legislators who are not yet there on LGB equality issues could support trans rights. Representative Fawcett is a member of an evangelical church. She said that her remarks would be framed by her perspective – WWJD. WWJD? I wondered what she meant by that. She explained that she is guided by the question, What Would Jesus Do? Quickly, she answered – guided by this frame, she strongly supported the bill.

It was late. I had been sitting on a bench outside of the House chamber, passing notes to legislative aides, speaking to government officials, lobbyists, and supporters since arriving at the State House at 1:30 that afternoon. It was close to 11 p.m. I needed a cookie. I told one of our lobbyists, Betty Gallo (who had let me pick the chicken off her cobb salad for my dinner), that I was going to go to the vending machine for a cookie. I was reachable by text, by phone, by a shout down the halls. She said, “No, don’t go.” The majority leader was speaking in support of the bill. Nobody typically speaks after that and the vote would be called. I thought maybe I could still get to the vending machine and back in time.

Then, I heard the bell sound for a vote. I raced upstairs to the gallery so I could see the board, see the representatives casting their votes. I tried to count green dots and red dots but got lost among them. Then I heard the clerk announce the final tally. Seventy-seven in favor. Sixty-two opposed. I could hardly let myself believe it. For the first time since it was introduced six years ago, we had moved the bill through the House.

Much work remains. That I knew (and still know). We’ve still got to get it through the Senate and then, of course, secure Gov. Dan Malloy’s signature (he has, though, been a terrific champion on this one). Today I woke up to the education, advocacy, and hard work still needed to make this bill law. But last night, just for a little bit, at least on the half-hour drive home from Hartford to my house in Western Massachusetts, I did a teeny bit of celebrating. Hooray.
Posted by GLAD at 3:09 PM

Thank you for your tireless work on this bill, and so many others!

The only problem I had with the Connecticut debate was the proponents of the bill were so poorly coached and aware of the issue.

They were not able to properly address the social issues being addressed by the opposition (crossdressers and "transvestites") while not truly addressing the medical issue that transsexuals and intersex individuals face.

Until the equality community finally gets their head out of the sand and realizes that gender identity and gender expression are two different things, transsexuals and intersex (gender identity) will continue to be thrown under the bus at the hands of cross dressers with full sex drives congruent to their birth gender (gender expression).

In any state where bathroom issues come up, I would support an amendment that would define gender based on the individual's state identification card or federal passport. In CT, the driver's license can be changed with a "hormone letter" from a physician. This is "gender identity" in my book. Those who do not identify that way would be considered "gender expression".

Of course, the GLB community does not want to see it. They see us all as a social issue and deny that there's even a medical issue for a significant subset of those who fall under the current "transgender" umbrella. Hopefully the equality community will finally wake up and get their head out of the sand.

The only problem with requiring an ID that reflects your true gender is $money$. Over a third of trans-people make less than the federal poverty level.