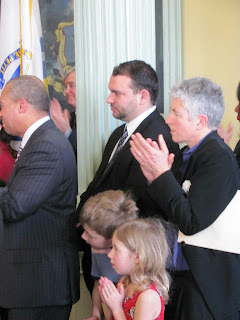 For some reason, I felt compelled to bring my kids to the governor’s ceremonial signing of the Transgender Equal Rights Bill last Thursday. They patiently (well, pretty patiently) listened to nearly an hour of speeches by legislators, officials, and advocates. That afternoon, I took them ice skating at Frog Pond on the Boston Common. On the ride home that night, I asked them what they thought of the day, imagining they might say something enthusiastic about Governor Deval Patrick giving them a pen after signing the bill. Maybe I thought one of them would say that it was cool to be in the State House or to get to shake Attorney General Martha Coakley’s hand. Instead, my daughter said that the signing was boring. My son said the best part of the day was ice skating.

Their responses really came as no surprise to me. I knew ahead of time that the ceremony would be a bit long for their attention spans, that they would not really be able to understand all that was said, and that their motivation for choosing to go (they did have a choice) might largely have been about getting the day off from school to take a trip to Boston. Still, I felt compelled to bring them and I finally think I know why.

A couple of weeks before the signing, I got an e-mail from a client (and now friend) who is the caretaker of her 6-year-old grandchild (who I’ll call Susan, not her real name, in order to protect her privacy). I’ve had the great fortune to be able to advocate for this family as Susan started school, working with a public school system that presumed transgender children do not exist. Together we explained that this child’s school records need to reflect her female gender identity and not her male assigned birth sex. Together we explained to the school the importance of this child consistently being referred to as a girl including by using her taken (now legal) name and female pronouns. And sometime in the future, I imagine, we may need to convince the school that no matter who knows that this child is transgender and whatever the reaction from other parents, kids, or people in the community, the school’s obligation is to ensure that this child has the same educational opportunities as all the other children and that means providing unwavering support for her as the girl that she is.

In her e-mail, Susan’s grandmother said that she wanted to bring Susan to the signing. “It’s an important event in her life and I want her to witness it,” she explained. I understood immediately the importance of the event and responded that I, too, was planning to bring my kids. Part of my motivation was for them to see the culmination of years of my work, work that sometimes drew me away from them on weekends and evenings after which they would ask where I was and why I was not home.

But that was only part of it. I also wanted them to hear from our governor about the importance of this new law and see him put his signature affirming the language of this law, the drafting into which I had put much time and energy. At the ceremony itself, it became even clearer to me why I had brought my kids. Representative Rushing, with unmatched poignancy explained in his remarks that this new law does not create rights. As he said to a crowded room packed with transgender people, our allies and family members, “You were born with th[e]se rights.” This law, he explained, “protect[s] and acknowledge[s] those rights. That is what we are celebrating today.” He went on to say that “we should not forget the time when we did not acknowledge those rights and your humanity,” and for that “we are incredibly sorry.”

This new law cannot change history. It will not restore the losses the community has suffered because of discrimination. It will not redress the indignities transgender people have faced in housing, employment, education, and beyond. And, as we all know, it is not perfect. Even as it includes protections for education, employment, and housing, and against hate crimes, it leaves out key protections in the context of public accommodations.

Notwithstanding, the new law provides hope and promise for the future. It sends a strong message to our transgender children as well as to those who are not transgender that transgender people matter in the eyes of the law. Nobody should be deprived an education, a job, or housing because of others misperceptions about who we are as men and women, boys and girls. And that’s a great start. It does not fix the past but it bodes well for the future.

The ceremonial signing of the law that hopefully triggers a change in action and attitudes and creates a promise for a more hopeful future is something I wanted my children to witness. Even if the event was eclipsed, in their eyes, by the excitement of ice skating on Frog Pond, I’m glad I brought them.

Posted by Laura Kiritsy at 9:36 AM

I have not dragged my sons into the fray with me as a transgender person outside the home and in some regards I worry that I've done them a disservice by not doing so.

That being said, I am certain they are more fully human, more kind, more considerate people because they've had to bear witness to my life since transitioning and have supported me emotionally.

Friends, family, and supporters of LGBTQI rights gain a level of enlightenment regarding the true nature of love--and for that we are all blessed.