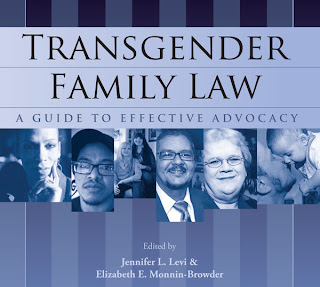 We popped a bottle of champagne at the GLAD offices last week. What did we toast? It wasn’t a court victory, which is ordinarily the only thing that’s worthy of the bubbly around here. Rather, we hoisted our plastic cups (mine contained Sierra Mist, as did the other teetotalers’’ in the office) to celebrate the publication of Transgender Family Law: A Guide to Effective Advocacy.  It’s the very first time in GLAD’s 34-year history that we’ve published a book – and a groundbreaking one at that – so there was reason to celebrate. Co-edited by Jennifer Levi, the director of our Transgender Rights Project, and Liz Monnin-Browder, a former staff attorney now with the firm Ropes & Gray, Transgender Family Law is the first book to comprehensively address legal issues facing transgender people in the family law context and provide practitioners the tools to effectively represent transgender clients.

That’s kind of where the celebrating stops. Because it’s hard to gauge what’s worse – the fact that until now there was no authoritative guide to help trans people and their attorneys navigate a system that has long been hostile to the transgender community, or that there is a need for such a book in the first place. As Jennifer often says, the transgender community is where the LGB community was about 40 years ago in terms of respect and recognition by the family courts.

I learned that firsthand while talking to some folks who have been negatively impacted by a family court system that is largely ill-equipped to deal with the reality of transgender people’s lives. As part of the public education campaign we’ve launched in conjunction with the publication of Transgender Family Law: A Guide to Effective Advocacy, I met people like Leslie Swanson (a pseudonym), the grandmother of a trans girl, whose first attorney told her that if she disclosed her granddaughter’s trans status to the court it would jeopardize Leslie’s chance of getting custody of the child. On top of that, the guardian ad litem assigned to assess the child’s needs for the court referred to Leslie’s granddaughter throughout her report as “he/she.” It only got worse from there. You can read Leslie’s story here.

I also talked with Joy Ladin, whose estranged wife claimed in her divorce filing that Joy’s transition from male to female caused her to be a danger to their two young daughters, which led to a period where Joy, an English professor, could only visit with the girls in a supervised setting.

I revisited the story of Michael Kantaras, the Florida trans man whose divorce and custody trial made headlines back in the 2000s when it was broadcast on Court TV. Michael’s estranged wife sought to strip him of his parental rights to their two children, whom they had raised together from birth on the grounds that they were never legally married because Michael is transgender. Even 13 years after the fact, it was heartbreaking to hear Michael talk about how terrified he was about losing his children, when all he ever wanted from the time he was a child was “to have kids and a family and be a husband.”

James Allan Scott is a trans man whose wife of 12 years, Rebecca Robertson, is trying to have their marriage voided by arguing that James is female, and, because Texas does not recognize same-sex marriage, they have no legal relationship. Never mind that Rebecca was aware and fully supportive of James’ transition, which happened prior to their marriage. Rebecca’s attorney relied on a number of previous negative court rulings regarding the legal status of transgender people post-transition to make the case that the marriage should be voided. If Rebecca gets her way, James, who is disabled and living in poverty, would not be entitled to any equitable division of the assets the couple accumulated during their marriage. He’ll basically be left with nothing.

Such heartbreaking stories were the impetus behind Transgender Family Law: A Guide to Effective Advocacy. We firmly hope that the publication of this book will help begin to turn the tide of negative legal precedents in trans family law cases and ensure that the transgender community’s rights as people, parents, or spouses are affirmed and protected by the family court system. Now that would be something to celebrate.