A must-read post from my colleague Maryse Pearce (who is the third person to the right of the Vice President in the photo below) who attended a BBQ for emerging LGBT leaders hosted by Vice President Joe Biden and his wife Dr. Jill Biden in DC last week. Maryse has a great eye for detail. 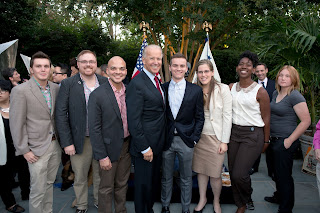 My day in DC began with an LGBT policy roundtable. The 150 other “emerging LGBT leaders” and I were welcomed by Gautam Raghavan, Associate Director of the White House’s Office of Public Engagement, and John Berry, Director of the US Office of Personnel Management and the highest ranking openly gay person in Obama’s administration. Berry thanked us all for the work we had done for LGBT people, and said he wouldn’t be surprised if a future president was sitting in the room. “And I’m sure he or she—“

“Or they!” someone called out.

“—will be great,” Berry finished. We are leaders of the new school, indeed.

The morning’s roundtable consisted of 3 panels: “LGBT Rights Are Human Rights” (title taken from Secretary of State Clinton’s speech last November), which talked about the US role promoting LGBT rights abroad; a legal update; and a discussion of health and safety issues for LGBTQ youth.

One of my favorite moments of the day, though, came not from the official panel, but from another attendee. In between panels, 10 minutes were set aside so that the attendees could stand up and give an “elevator pitch” about what they were working on, and ask for help or advice if they needed it. I stood up to say that if people were interested in following DOMA’s downfall, they should follow GLAD’s facebook and twitter updates. A few minutes later, someone from Montana stood up to ask for advice on rural organizing.

“And I just want to say, I’m so happy single-A GLAD is here,” he said. “We use your ‘Everyone Matters’ [transgender rights] video, and it’s really helped.”

That completely made my day. In Public Affairs, we create and distribute educational materials all the time, and it’s amazing to get feedback and thanks, especially from someone from the other side of the country.
In the afternoon, we had time to ourselves. I visited a friend who works at the Gay and Lesbian Victory Fund and Institute, learned a little about their upcoming events, and toured their office.

Next, I went to a Senate Hearing on Hate Crimes and Domestic Extremism, at the invitation of Ben de Guzman from the National Queer Asian Pacific Islander Alliance. The focus of the hearing was Muslim and Sikh Americans, who have increasingly been the target of domestic terrorism. Politicians and law professors from both sides of the aisle argued about the benefits and limitations of hate crime laws, but the most moving testimony was from a young man whose mother was murdered while worshipping at a gurdwara in Oak Creek, Wisconsin.

Finally, it was time for the main event: the LGBTQ BBQ at the VP’s house. 30 minutes and 3 security checkpoints later, my colleague Allison Wright and I made it through Biden’s Naval Observatory compound, and into the backyard of his huge house. It was lucky I got in late: I was standing by the entrance when someone official asked me to move aside; Biden was about to enter. Naturally, I did not move over, and a moment later, Joe and Dr. Jill B walked by me!

The Vice President and his wife were introduced by a West Point graduate, who thanked their administration for all they’ve done for LGBT people, including ending Don’t Ask, Don’t Tell, which was repealed exactly a year ago. Dr. and Vice President Biden both spoke about how they have always known and supported LGBT people, and how they see full LGBT equality as the inevitable next step in US civil rights – echoing Michelle Obama’s DNC remarks. “Don’t thank me,” Biden said, getting choked up. “I should be thanking you for all you’ve done, and all the courage you’ve shown.”

When he was done speaking, Biden simply stepped away from the podium. After a moment of hesitation, the crowd surged around him, shaking his hand and taking pictures. I was one person away from Biden when his handlers intervened and asked us to form a line for pictures. The woman who was in the middle of asking him for a picture, a West Point lesbian in a navy blazer, got the Biden treatment: he put one hand on her shoulder and touched her cheek with the other hand, saying, “I’ll follow you. You look like you know what’s going on!”

I took a group picture with the Vice President and several other of the emerging leaders. After the picture was snapped, Biden shook everyone’s hand and asked them where they were from. When it was my turn, I ignored his hand and went in for a hug, which he returned tightly. And then I was moved along, so the next group could have their picture taken.

If you can believe it, the night got better from there. While on my way to get food, I did a double take: Mara Keisling, founding executive director of the National Center for Transgender Equality, was standing by the pool! She saw me staring at her, and paused her conversation to say hello to me.

“You’ve been one of my heroes for years!” I said after I introduced myself.

“Oh, that’s terrible,” she chided. We spoke for a few minutes, the conversation peppered with Mara’s self-deprecating humor. On my way to get a glass of wine later, I walked by another woman I deeply admire: Janet Mock. I told her how honored I was to meet her, and how excited I was to hear her speak at the Hispanic Black Gay Coalition’s Boston Youth Empowerment Conference in October.

I spent the rest of the night talking with other emerging leaders: someone who fights for trans-inclusive shelters for victims of domestic violence; someone who leads workshops on transgender issues for the DC police; someone who does HIV education in North Carolina; someone from St Louis who mixes politics into her art. I wanted to talk about GLAD’s work (which I did, of course), but everyone had such amazing stories and was doing such incredible things, I could have been content to just listen all night.

At 8:30, I got into a cab with the artist from St Louis, headed back to the center of DC. A man who also needed to go to Union Station hopped into the front seat. After he introduced himself, I realized that “Kevin” was Kevin Cathcart, executive director of Lambda Legal, and former ED of GLAD. We chatted about GLAD lawyers and our respective DOMA cases, and when we got to Union Station, he generously paid for the cab, saying it was his treat as we were in “Lambda territory.”

In short, it was an amazing day spent with both luminaries in the fight for full LGBT equality, and the new school of leaders.
Posted by Laura Kiritsy at 10:28 AM