An Academy of LGBT Issues: Wrapping Up Creating Change 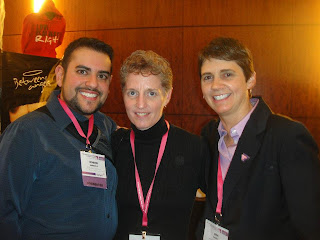 It’s hard to figure out where to start a post wrapping up GLAD’s experience at Creating Change 2012, the National Gay & Lesbian Task Force’s annual national conference on LGBT equality. With more than 3000 LGBT activists from across the country descending on the Baltimore Hilton to attend some 250 workshops and training sessions, amazing plenaries and endless social opportunities over the course of five days last week, it was a tad overwhelming – but in a good way. So I’ll leave the hardest part to my colleague Eric Carreno, who summed up the conference quite accurately:

“It was a crazy experience, but well worth it,” says Eric, who attended Creating Change as a Pipeline Project fellow. “I was impressed at the diversity of participants and commitment to the movement from all walks of life. Creating Change is a marketplace of ideas, a place to share and learn from one another, an academy of LGBT issues, a meeting place. It was great, hectic, overwhelming, yet accessible.”

Once I adjusted to the sheer size of the conference – there were queer people jammed into every corner of the hotel and many workshops drew overflow crowds – I made sure to snag a good seat for the opening plenary session on Thursday evening, which featured NAACP President and CEO Ben Jealous. Ben gave an energetic speech during which he pointed out the NAACP’s overall commitment to LGBT rights -- with specific shout outs to supporting Maryland’s efforts to pass marriage and comprehensive transgender nondiscrimination bills – and spoke about his close relationship with his gender-nonconforming sibling, Jason.

But more interesting to me was when Ben hit on an issue that isn’t on the traditional LGBT agenda: the wave of voting laws – more than 30 – that were introduced in state legislatures across the country last year, which aim to effectively make it more difficult for many Americans to have their say at the ballot box.

“This suppression comes in the form of photo ID bills, limits on voter registration, limits on early voting, and ex-felon disenfranchisement,” he explained to the crowd. “And it consistently targets the heart of the progressive electorate -- people of color, students, blue collar workers, women, the elderly and disabled Americans.”

Task Force Executive Director Rea Carey picked up this issue in her State of the LGBT movement address at the following day’s plenary session, pointing out that such laws also impact LGBT people. Like Ben the night before, Rea called the initiatives “a plan to cut out the base of progressive voters from the process.” She also noted these efforts are “having a devastating effect on the ability of transgender people to vote” – an apparent reference to the fact that many trans people don’t have official identity documents that match their lived gender because of legal restrictions or financial hardship.

Speaking of Rea’s state of the movement speech, GLAD’s work featured prominently in the victories and hopeful developments Rea detailed during her remarks. She noted the passage of transgender non-discrimination protections in Massachusetts and the defeat of LD 1046 in Maine, which would have excluded transgender people from sex-segregated spaces. GLAD was integrally involved in the coalitions that secured those victories last year, as you might have read in my Top 10 Victories of 2011 blog post a couple months back. And she gave an awesome shout out to the work we’re doing to win back marriage in Maine: “[A]fter two years of public education, field organizing, signature-gathering, and just plain old knocking on more than one hundred thousand doors,” she told the crowd, “Equality Maine; Gay & Lesbian Advocates & Defenders; and the Why Marriage Matters Maine Coalition delivered over 105,000 signatures to the statehouse, announcing that they will make Maine the first state to go to the ballot box with a proactive measure to pursue marriage equality.” Coming just one day after the press conference in Augusta announcing our effort, the recognition was quite a thrill.

Saturday’s plenary was equally as thrilling, with HUD Secretary Shaun Donovan making an appearance to announce that the Obama administration would be implementing a new policy prohibiting owners and operators of HUD-funded housing, or housing whose financing HUD insures, from discriminating on the basis of sexual orientation or gender identity. The policy also clarifies that LGBT families are eligible for HUD’s public housing and Housing Choice Voucher, and that discrimination based on sexual orientation and gender identity was prohibited in the granting of a Federal Housing Administration (FHA)-insured mortgage. What I loved about Secretary Donovan’s remarks was in announcing this policy, he shared the story of Michelle DeShane, who wanted to add her partner Mitch, a transgender man, to the housing voucher she receives to find affordable housing. Her local housing authority denied her request on the grounds that the couple didn’t meet its definition of family. Michelle and Mitch were then referred to a nearby housing authority that, as they were told, “accepts everyone – even Martians.” “That’s just wrong,” said Secretary Donovan. “No one should be subject to that kind of treatment or denied access to housing assistance because of their sexual orientation or gender identity.” Once again, the Obama administration was not only acknowledging the struggles of transgender Americans, it was taking steps to remedy such unfair treatment – the latest of several trans-friendly policy changes the administration has implemented.

Beyond the plenary sessions, I didn’t get to as many workshops as I would have liked. I confess I spent a lot of time in my room (over)preparing for the presentations I gave in two different workshops on Saturday. Public speaking makes me anxious (though I’m pretty good at telling other people what to say before pushing them into the spotlight). You can read more about each of those in my pre-conference blog post. I’m happy to report that the workshops were fun, well-attended, and participants were very engaged. And I did not make an ass out of myself or GLAD, as far as I know. Ditto for my co-worker Robbie Samuels, who hosted two workshops, Art of the Schmooze and Fundraising: Getting Past the Fear of Asking. Not long before I departed the conference on Saturday night, I struck up a random conversation with a woman who does development for an LGBT organization in Florida. As it turns out, she attended Robbie’s fundraising workshop and she gave him glowing reviews for the quality of his presentation and the quantity of practical information. Guess I wasn’t the only one who didn’t tank.

Next year’s Creating Change is in Atlanta. Maybe we’ll see you there?

Posted by Laura Kiritsy at 4:35 PM