Everyone’s Irish on St. Patrick’s Day! Except if you’re gay! 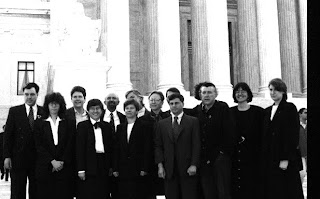 Gays need not apply when it comes to marching in South Boston’s St. Patrick’s Day Parade. It’s hard to believe in the year 2012, but organizers – the Allied Veteran’s War Council under the leadership of Parade Organizer Philip J. Wuschke Jr. – continue to exclude LGBT organizations from participating in the festivities. Just ask our friends over at MassEquality, whose application to march parade organizers rejected last month.

It’s not for lack of trying on our part. In the early 1990s, GLAD sued the parade organizers on behalf of the Irish-American Gay, Lesbian, Bisexual Group of Boston (GLiB), a multi-year battle that took GLAD and GLiB all the way to the U.S. Supreme Court with the case Hurley v. the Irish-American Gay, Lesbian and Bisexual Group of Boston. GLAD compiled a multi-media history of the case for our 30th anniversary a few years back that is still available here. There are photos, an interview with GLAD founder John Ward – who, thanks to Hurley, was the first openly gay man to argue before the Supreme Court – case documents, an excellent podcast featuring GLiB members, and archival photos and news coverage.

Prior to the 1995 U.S. Supreme Court ruling, GLAD and GLiB won seven Massachusetts court rulings affirming the right of LGB Irish-Americans to participate in a public -- and taxpayer funded -- civic event celebrating their heritage, and GLiB joined the 1992 and 1993 parades under court order. It wasn’t pretty. Our podcast includes chilling recollections of the 1992 parade from several GLiB members who marched with the protection of police, a SWAT team and snipers perched on roof tops along the route – while rageful spectators hurled insults, rocks and other debris. As GLiB member David O'Connor recalls in our podcast, “It was the longest four miles of our life, but we did it.”

In a 2009 editorial referencing its coverage of the two GLiB-inclusive St. Patrick’s Day parades, Bay Windows described the scene this way:

People lined the streets holding handmade signs covered in gay slurs; our photographer Marilyn Humphries photographed a man proudly brandishing a "God Hates Fags" sign six years before Fred Phelps made the phrase famous by picketing Matthew Shepard's funeral. Our own coverage of the 1992 parade described one attendee, a white-haired grandmother holding her grandchild in her arms, shouting from the sidelines, "Kill the faggots," as the 25 brave GLIB marchers went past. A group of about ten pre-pubescent boys in Celtics hats gave the GLIB marchers the thumbs-down and muttered, "Do me up the bum." A pair of cute little girls with bows in their hair booed and chanted, "Homos" at the crowd, egged on by adults. As the GLIB marchers walked along the parade route, surrounded by dozens of police officers and two box trucks full of riot police, the crowd shouted slurs at them and pelted them with smoke bombs, fire crackers, condoms, latex gloves, beer bottles and rocks. Many in the crowd turned their backs when the GLIB marchers walked past.

Yikes. The courage of the GLiB members who marched in those parades astounds and inspires me. I prefer to dwell on their strength, rather than the ugliness of the long-ago spectators and the mean-spiritedness of the current parade organizers clinging to a bigoted past. Well at least my tax dollars aren’t paying for their prejudice anymore. That’s some consolation.

The ongoing exclusion of LGBT organizations from the Southie parade is a reminder that even in Boston – one of the most LGBT-supportive cities in one of the most LGBT-friendly states in our nation – there is still much work to be done to ensure full legal and social equality for our community. Sooner or later everyone truly will be Irish on St. Patrick’s Day (well, at least metaphorically).

Until then, the local chapter of Veterans for Peace – an organization that is also excluded from the parade – is sponsoring the all-inclusive St. Patrick’s Peace Parade, which follows a mile behind the main event – apparently, that's just far enough to keep all the gay cooties and flower power from infecting the fragile fellas of the Allied Veteran’s War Council. Learn more about this great event here.

Posted by Laura Kiritsy at 2:08 PM