Gill Decision Day: Behind the Scenes, in the Headlines 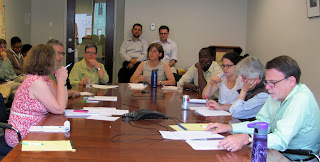 GLAD staff around the conference table during a press call
on the Gill v. OPM appeals court decision

Yesterday’s ruling in favor of the plaintiffs in our Gill DOMA lawsuit made for a crazy (in a good way) day. We weren’t exactly expecting a decision so soon, given that the First Circuit Court of Appeals had just heard the case on April 4. So there was a moment of panic among the non-lawyers in the office when we learned at about 9:58 a.m. that the decision was coming at 10:00, since we hadn’t yet finalized our Decision Day Plan – the magic document that keeps each of us from killing each other on task when a big ruling comes down. About 30 seconds later someone was shouting “We won!” from somewhere in the office and panic gave way, briefly, to joy. Then the phones started ringing. We decided to test run the Decision Day Plan from Pedersen -- our other pending DOMA lawsuit -- which has been done for months now. You gotta work with what you have.

Two hours later, after the decision had been thoroughly reviewed, plaintiffs conferenced with, and media advisories, press releases and emails drafted and sent, our entire staff calmly crowded into our conference room for a quickly organized tele-press conference. We were lucky on such short notice to have plaintiff couples Jonathan Knight and Marlin Nabors, and Bette Jo Green and Jo Ann Whitehead join the call. They were on the line with Mary Bonauto, who dialed in from her Maine office, and more than 40 reporters.

Mary gave some brief background on the lawsuit, then some analysis of the decision and where things might go from here (like the U.S. Supreme Court!). True to her give-them-all-the-facts-first style, Mary forgot to mention one important thing before she turned things over to our legal director, Gary Buseck, who promptly stated the obvious:

“We’re very happy with this result. I think it’s what we’ve worked a lot of years for and believe it’s the correct decision.”

“Yes. I agree. I’m happy,” Mary chimed in to laughter from reporters and co-workers. “I’m just overwhelmed trying to make sure I get a handle on the decision here.”

Since that’s her job, she was easily forgiven. But all our plaintiffs really needed to know was the “we won” part, and they spoke movingly about what the decision meant to them -- particularly Jonathan, a soft-spoken guy who typically leaves most of the commentary to his husband Marlin.

“Marlin and I have been together for seven years and married for five, and we do our very best to live our lives together in truth and authenticity,” he said in his deliberate, thoughtful manner. “We know that our relationship is full of the same kind of hopes, struggles and dynamics as all other married couples. So we’re thrilled to learn the law’s on the same page now and that we fall into the same class as everyone else. We’re no longer second class citizens.” If it wasn’t for the 40+ members of the media on the phone, I’m pretty sure we all would have jumped up and cheered Jonathan’s perfectly eloquent analysis.

In my mind, there’s not much else to say about this case. That doesn’t mean we don’t appreciate all of the media coverage of the decision, which gives us an important opportunity to amplify voices like Jonathan’s to educate the public about what we’re fighting for

Here’s a quick round-up of some of the more insightful and in-depth coverage:

Richard Socarides, an openly gay man who worked in the Clinton Administration, calls the Gill decision “a blockbuster ruling” in a blog post for the The New Yorker. It makes me giddy!

The Boston Globe was the first outlet we saw to get comment from attorney Paul Clement, who argued the losing side in Gill. Clement said his team hasn’t decided whether to appeal, but he added, “We have always been clear we expect this matter ultimately to be decided by the Supreme Court, and that has not changed.” Bring it!

New York Times reporters Katharine Seelye and Ethan Bronner did an excellent analysis of the decision and its impact on the LGBT movement and Gill’s potential for victory at the Supreme Court, in the likely event it lands there.

Metroweekly’s Chris Geidner also did a great analysis of the decision, observing that its narrowness offers “a roadmap” for Supreme Court Justice Anthony Kennedy, whom many have pegged as the swing vote on any DOMA or marriage case that makes it to the High Court.

The Washington Post’s Joe Davidson interviewed our plaintiffs Al Koski and Jim Fitzgerald for his Federal Diary column examining the role federal employees are playing in the fight against DOMA. “Equal rights is all this is about,” Davidson writes. Indeed, it’s that simple.

The Post also did a more thorough analysis of the decision, with comment from Dale Schowengerdt, an attorney at the anti-LGBT legal organization Alliance Defense Fund. “Under this rationale, if just one state decided to accept polygamy, the federal government and perhaps other states would be forced to accept it, too,” he said. Yawn.
Posted by Laura Kiritsy at 4:29 PM