Sprinkling Seeds of Trans Equality and Other Tales from Netroots Nation 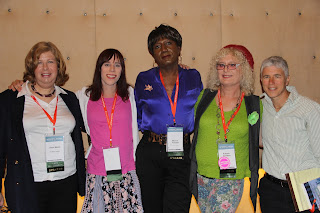 
It’s true – I chose to spend the Saturday of Boston Pride hanging out at GLAD’s booth in the Netroots Nation exhibition hall, and I liked it. Drag queens, Mardi Gras beads and block parties are great, but who can resist the opportunity to spend the day inside a hotel convention center gazing into the eyes of progressive bloggers from around the country as they peer at you over their open laptops? For me and my colleagues Amanda Johnston and Carisa Cunningham, the hottest ticket around last week was for Netroots Nation 2012 down in Providence, Rhode Island*.

The highlight, of course, was the GLAD-organized panel Blogging for Transgender Equality on Friday morning, the first trans-specific panel in Netroots Nation’s seven-year history. We had a great line-up of panelists: our Transgender Rights Project Director Jennifer Levi; and bloggers Autumn Sandeen, Jos Truitt, Monica Roberts and Jillian Weiss. Jillian was a most excellent moderator for the panel, which was well attended by a crowd that seemed as excited as we were that trans issues were being discussed at Netroots Nation. The discussion was wide ranging and nuanced. For instance, while Jos noted that the mainstream media’s coverage of the transgender community has improved overall, Monica lamented the lack of coverage of trans women of color and their accomplishments. Ultimately, said Jos, the trans community needs to guide the mainstream media to the stories of the community that need to be covered.

The Netroots website has a great page dedicated to our panel, featuring a complete video of the presentation and discussion, panelist bios, and a catalogue of some of the awesome Tweets from folks who attended. See what you missed here. And check out Amanda’s photos from the panel on Facebook (don’t forget to “like” and “share” – this is a social media conference, after all!). So exciting!

My favorite Tweet during the panel was this one, from Netroots conventioneer @nolanpack:
#NN12 Blogging for Transgender Equity - amazing panel! Learning so much!

Yay! That’s why we organized it.

Another great thing about Netroots was the opportunity to meet and hear from some of the community’s most influential bloggers and activists, particularly at the LGBT Connect, a daylong pre-conference that took place last Wednesday, courtesy of online activist guru Mike Rogers. The most interesting portion for me was a panel discussion that featured activists from Florida, Indiana, North Carolina and South Carolina discussing the successes and struggles of LGBT organizing in conservative states. It was an eye opening discussion, and a reminder that despite our community’s gains -- from the recent rulings striking down DOMA to the historic support we have from President Barack Obama -- that in many states LGBT people are still fighting for the most basic legal protections.

We wrapped it up with the LGBT caucus on Saturday morning. I didn’t expect great turnout after Friday night’s numerous festivities, especially since while I was at the coffee bar in the convention a hall, a woman talking on her cell phone noted that a discussion with New York Times columnist Paul Krugman that morning was poorly attended “because everyone’s hungover.” With all due respect to Mr. Krugman, the LGBT caucus was pretty crowded. We even got a visit from Maryland Senator Ben Cardin, a staunch LGBT supporter who addressed the crowd and took a bunch of caucus-goer questions. Given our recent victory in our Gill DOMA lawsuit (which, incidentally, Dahlia Lithwick raised in Friday afternoon’s Big Decisions panel as very likely to be taken up by the Supreme Court next session), I was heartened to hear Sen. Cardin tell the crowd, “I want to repeal DOMA. I want to get it done. Marriage equality is a basic right.”

A nice way to end my visit with the Netroots Nation, and this blog post.

*And anyway, we get another chance to celebrate Pride right there in Providence next weekend, when Rhode Island Pride honors our own attorney Karen Loewy for her years of advocacy in the state. Join us there!
Posted by Laura Kiritsy at 12:34 PM