New England has led the nation in affirming the love and commitment of same-sex couples and families.

From securing the rights of same-sex couples to adopt children, to elevating protections for civil unions, to celebrating groundbreaking marriage equality in Massachusetts 10 years ago this year - with Connecticut, Vermont, New Hampshire, Maine (and hopefully soon Rhode Island) following suit, GLAD is proud to be a part of ensuring that the love shared in LGBT families and relationships can thrive and flourish.

Take a look at some heart-warming New England love stories below, and have a happy Valentine’s Day!

David and Rob David and Rob had a historic wedding ceremony at Arlington Street Church as one of the first same-sex couples to legally marry in the United States on May 17, 2004. “We had so much in common and could really support each other.” Together they have five children and Seven grandchildren.

Barbara and Robin One fateful day, when Robin was filling in for a colleague at a clinic, she met Barbara, a computer consultant and small-business owner. The two became great friends and quickly developed a strong connection. After Barbara was no longer Robin’s patient, their relationship grew and blossomed into love. 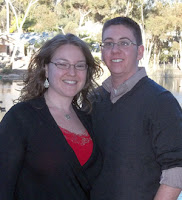 Mason and Lauren “I hate to use the word ‘traditional,’” Mason says, “but we’re very much an average married couple.” Lauren’s loving support was critical in what Mason calls his “journey through gender.” “We approached this as a team, and I never felt alone because of that.”

Daisy and Jamie At the time of their first date, Daisy was a member of a medieval re-enactment group, and they both knew it didn't get much geekier than hanging out in the woods, reliving the wild and woolly days of Robin Hood and Joan of Arc in puffy hats and tunics. Nonetheless, says Jamie, “I married her anyway.” 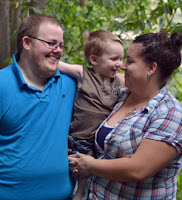 Kaden and Brittany At first they were just close friends, sharing details of their lives in frequent conversations. Then love began to blossom. “He got very flirtatious,” Brittany recalls, although Kaden remembers it differently.“I don’t flirt,” he says, smirking. Six years later, Kaden and Brittany are married and living in Strafford County.

Jerry and John “We clicked,” says Jerry. “It worked. We have a lot in common and at the same time we’re very different. I like to say that we complement each other in those areas where we’re most deficient ourselves. We don’t always see eye to eye on everything, but when we don’t it’s oftentimes for our own amusement.”
Posted by GLAD at 11:01 AM