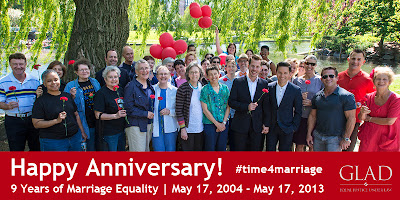 It’s been fascinating and fun to watch as legislators in Rhode Island, Delaware and Minnesota passed marriage equality bills that their respective governors enthusiastically signed into law in the past few weeks.

Things have changed dramatically from 10 years ago, when the Massachusetts Supreme Judicial Court ruling in our Goodridge marriage lawsuit pitched Beacon Hill -- along with our usual opponents in the Catholic Church hierarchy and the religious right -- into a state of hysteria.

“Opposition set in in about one nano-second,” Mary Bonauto recalled in the documentary film Saving Marriage. That sounds about right.


The knee-jerk reactions from our then governor, attorney general, House speaker and Senate president (none of whom still hold office) was that this historic decision just could not stand, sparking years of legislative battling – which our community ultimately won –  to protect Goodridge from a constitutional amendment banning marriage between same-sex couples that would have rendered the decision moot.

In the midst of the uncertainty about whether the amendment would pass, the very first marriages between same-sex couples anywhere in the country began on May 17, 2004. As the associate editor of Bay Windows newspaper at the time, I had a front row seat to history for which I’ll be forever grateful.

To this day, I still get goose bumps and a little misty when I recall the wedding of Rob Compton and David Wilson at Boston’s Arlington Street Church on that glorious spring day. As the first of the seven Goodridge plaintiff couples to marry that day, the emotion in the crowded church was palpable. As I wrote at the time:

[The] tears of joy gave way to a far more unbridled emotional display when the Reverend Kim Crawford Harvie raised her right hand over the couple and said what Wilson and Compton - and countless others in the pews - have long waited to hear: "And now by the power vested in me by the Commonwealth of Massachusetts," said Crawford Harvie, at which point the sanctuary erupted in a rafter-rattling burst of applause, foot stomping and cheers that abated just long enough for her to say, "I pronounce you partners for life, legally married."

After waiting so long and working so hard for equality, those words were truly cathartic.

From there, I hustled off to Newton, where plaintiffs Maureen Brodoff and Ellen Wade tied the knot in the office of then-mayor David Cohen, jammed together with their families and a media swarm.  Again, the feeling of “at last” permeated the proceedings, exemplified best when Maureen addressed her parents, who married when her mother was just 19, during the ceremony:

"Ellen and I have waited 24 years to get married," Brodoff told her parents, who were seated among Brodoff's three sisters and Wade's sister and her nephew, "but let me tell you - not to disapprove of your choice to get married so young, waiting does have its advantages. You were young and foolish, but lucky enough to have become perfect mates for each other. Here there is no luck involved. I know exactly who it is that I'm marrying and this marriage is, for that reason, so much more precious.”

Ellen and Maureen joined us yesterday in the Boston Public Garden to celebrate nine years of marriage equality in Massachusetts with a group photo of married couples and other supporters of the freedom to marry. 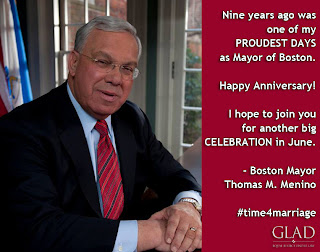 Boston's Mayor Thomas Menino honored the day with a statement of support, and current Massachusetts Governor Deval Patrick reflected on the joy - and ordinariness - of marriage equality in the Commonwealth in the Washington Post.

As we celebrate the anniversary of marriage in Massachusetts, it’s inspiring and encouraging to know that more and more Americans are coming around to supporting the freedom to marry for same-sex couples.

For four years after the Goodridge ruling, Massachusetts stood alone as a marriage equality state, until California (however briefly) and Connecticut joined in 2008. Now, we get three marriage states in the span of two weeks – on top of the three marriage states we picked up at the ballot box last November, bringing us to a total of 12 along with the District of Columbia. That’s some serious progress.

On the other hand, there’s still 38 states where loving, committed couples and their children are not treated the same as all other families.

The Supreme Court is currently weighing two cases that could dramatically alter the trajectory of the marriage movement. Congress is grappling with whether to include a provision to allow LGBT Americans to sponsor foreign-born spouses or partners for U.S. citizenship in the immigration reform billAnd we continue to wait for movement on the Employment NonDiscrimination Act (ENDA). There’s a lot of work yet to be done.

Today, we celebrate love on this historic day.

Tomorrow, the work continues.
Posted by GLAD at 9:53 AM