"The Court, the Closet and the Press" 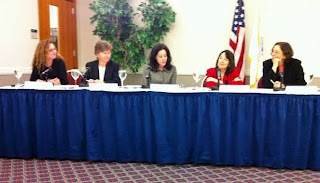 
Does the political theater of Supreme Court confirmation hearings push justices to the right on issues involving a free press? Dahlia Lithwick, Supreme Court writer for Slate, made this argument yesterday at a panel discussion on “The Court, the Closet, and the Press” at Suffolk University Law School.

Other speakers, including GLAD’s Mary Bonauto, Judge Nancy Gertner, and keynote speaker Stanford Law Professor Pamela Karlan, discussed recent cases where the Court weighed the interest of the public in robust discussion of important issues, against the fears of anti-equality advocates – and the court itself - around publicity.

Does the Court increasingly fear the media and the public – as evidenced in the decision not to allow the broadcast of the Prop 8 trial? As Professor Karlan pointed out, the court’s reasoning was that the trial should not be publicized because it involved controversial issues – i.e., because people might actually want to watch it.

Only those with the time and resources to be present in the courtroom could therefore watch the trial. And as more than one panelist pointed out, our current media environment allows people to restrict their information intake to sources with which they already agree; broadcasting, with its ability to reach large audiences that are not as self-selecting, is even more important today for public debate.

The legal and scholarly discussion was thought-provoking (and not incidentally it was fantastic to hear a panel entirely composed of smart and high-powered women), but Lithwick brought in the human dimension. The confirmation hearings of Justices Thomas and Alito were not only highly partisan political events – they were deeply scarring personal events for both men, and most likely their primary experience with the public and the media. And it wasn’t a good one. Lithwick says Alito in particular has moved to the right during his court tenure on speech issues. And she pointed out the sad symbolism of the Court having recently locked its front doors to the public.

Judge Gertner observed that Justice Sotomayor, too, had been called both a racist and a sexist in her hearing, but she seems to have gotten over it. Perhaps as a woman she has a tougher skin? But it certainly gave me food for thought – that as elected politicians use confirmation hearings to make political points and communicate with their bases, progressives may be setting themselves up to lose the war when the courts hear these issues and must decide whether it is “safe” to open up the political and legal process to public view.

Posted by Carisa Cunningham at 2:58 PM