My Afternoon on the Hot Seat, and Other Adventures in Transgender Advocacy 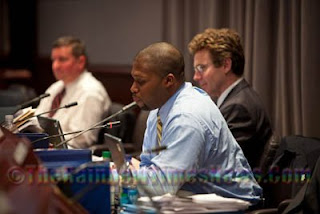 On Monday, I testified before the Connecticut Legislature’s Judiciary Committee in favor H.B. 6599, “An Act Concerning Discrimination,” which would add the phrase gender identity and expression in Connecticut’s non-discrimination laws. My prepared testimony was just about two minutes, but I spent the next hour on the hot seat, fielding questions from committee members about the bill and how, when adopted as law, it would be enforced. That is as it should be. It’s important to let those who are just learning about transgender people’s lives ask of all their questions and have them answered in a reasoned, thoughtful way.


I got lots and lots of questions about bathroom use by transgender people, which is no surprise since our opponents know that the more people talk about bathrooms the more generally insecure and scared people feel about supporting transgender non-discrimination laws. From Maine to Massachusetts to Connecticut and beyond, opponents of transgender equality have tried to derail progress and undermine legislative advances by speciously asserting that trans-inclusive civil rights laws will lead to gender-neutral bathrooms and/or create a rash of sexual predators in women’s bathrooms, including in radio and TV ads that have been effective in peeling away our support. Many lawmakers have become preoccupied with this misinformation even though more than 100 trans-inclusive non-discrimination laws and ordinances have been successfully implemented nationwide with no reported incidents of these alleged problems. And, as I explained at the hearing on Monday, the reality is that transgender people have to and do use bathrooms, often using the restroom that is consistent with our gender identity or expression regardless of our physiology or assigned birth sex.

Interestingly, though, for the first time at a public hearing, I also got questions about what happens when a masculine appearing woman (whether trans or not) uses the women’s room and other women complain to management or confront the individual telling her to leave. This was an easy question to answer because of it being so personal – I experience other women’s discomfort with me using women’s restrooms on a near daily basis. The reality is that when that happens, the person who is the object of other people’s uneasiness (often, me) has to stick up for herself and assert that she is in the right place and, because the law protects her right to be in that space regardless of other people’s derision and discomfort, the uncomfortable party often backs down. They don’t require the gender nonconforming person to physically prove or present identification backing up her asserted gender. Rather, they get a needed education about the fact of gender diversity that hopefully makes it so the next gender non-conforming woman they encounter in the restroom doesn’t have to face the hostility the first one did.

That’s how civil rights and non-discrimination laws work. They don’t make bias and prejudice go away immediately, but they definitely provide important legal protections for marginalized and discriminated people and groups. Hopefully, over time they also change hearts and minds by shifting the burden on others to explain why we shouldn’t be in public spaces -- or employed, or housed, or educated, etc. -- rather than on us to explain why we should. As I told the Judiciary Committee, other people may be made uncomfortable by [an] individual’s expression and that transgender person’s presence in their life but it’s just that kind of discomfort that I would say non-discrimination laws are intended to address and will diminish over time as transgender people just gain more visibility and more presence and more protections in our laws.

At the end of it all – the hearing actually lasted well over 11 hours – I think that proponents of H.B. 6599 made a compelling case of the passage of this bill. Our partners at ctEquality did a fantastic job of filling the room with supporters and lining up compelling testimony from trans men and women, parents of transgender youth, and a host of strong allies. I’m feeling optimistic about the passage of this bill this year, and, anyone who knows me well can attest to the rarity of such optimism.

As Director of GLAD’s Transgender Rights Project, I’ll be talking more about our work on H.B. 6599 and our entire docket of trans legal advocacy at an event next Wednesday called GLADHour. It’s an after-work happy hour at the Boston eatery Lir, so I promise not to cut into the fun by talking too long. But you’ll hear about the latest promising developments in Freeman v. Denny’s, a case in which we’re fighting for a Maine transwoman to have proper restroom access in a local restaurant, and our efforts to defeat a discriminatory bill – filed in response to Freeman – that would limit public restroom access for transgender people. The Transgender Rights Project is doing lots of other exciting and groundbreaking work. I hope you’ll show up to hear all about it. See you next Wednesday!