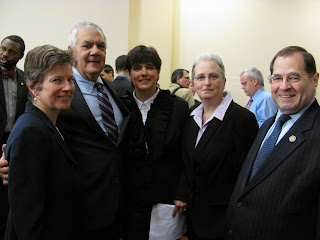 Yesterday I had the honor of accompanying Nancy Gill and Marcelle Letourneau, the lead plaintiffs in Gill v. OPM, GLAD’s First Circuit DOMA challenge, along with attorney Mary Bonauto, to Washington, D.C. The three were invited to speak at a press conference hosted by Congressman Jerrold Nadler of New York, who re-introduced the Respect for Marriage Act, his bill to repeal DOMA. Rep. Nadler’s history of active support for advancing LGBT rights on Capitol Hill is as long as his congressional career, which began in the early 1990s.

Nancy, Marcelle and I arrived at Reagan International Airport around 9:30 a.m. and took a cab to the Rayburn House Office Building, where the press conference was scheduled for 11:00 a.m. Nancy and Marcelle were making their first trip to D.C., and though they were about to share their story on a national stage – after waking up at 3 a.m. to catch our flight from Logan Airport – they were surprisingly cool, but enthusiastic. “Yesterday I was at home making cupcakes,” Nancy said in the cab. “And today I’m speaking at a press conference in Washington, D.C.!”

We were welcomed into Rep. Nadler’s office by Amy Rutkin, his chief of staff of 12 years. Mary was there waiting for us. We chatted with the congressman about New York’s rough and tumble political culture while awaiting the arrival of other press conference participants like Edie Windsor, a New Yorker who is also suing to overturn DOMA after a heartbreaking turn of events involving the illness and death of her spouse, Thea Spyer.

Rayburn Rm. 2226, where the press conference was held, was packed with reporters and LGBT advocates like Marc Solomon, the former MassEquality executive director who now works for Freedom to Marry, and Diego Sanchez, an aide to Congressman Barney Frank and the first out trans person to work on Capitol Hill. Freedom to Marry’s Evan Wolfson and Sean Eldridge, a GLAD donor, were also there.

Congressman Nadler spoke first, calling on Congress to undo the damage it created when it passed DOMA in 1996.

“DOMA cannot survive even the lowest level of judicial scrutiny and it has already been declared unconstitutional by a federal court,” he said, a reference to our Gill victory last July. He noted that former Republican Congressman and chief DOMA sponsor Bob Barr and President Bill Clinton, who signed DOMA into law, have since denounced DOMA and called for its repeal. “The time for dumping this shameful law is long overdue.” Rep. Nadler ended his remarks on a similar note, stating, “I am confident that with a president who is committed to repealing DOMA and the broad diverse coalition of Americans on our side we can and will dump DOMA once and for all.”

Reps. Tammy Baldwin, David Ciccilline, John Conyers, Barney Frank and Jared Polis also spoke, after which Rep. Nadler introduced Mary Bonauto, describing her as “a pioneering lawyer, a spectacular legal mind,” a description that while undoubtedly true, made Mary blush slightly. Mary introduced Nancy and Marcelle, who shared their story of how DOMA upended their plans for Marcelle to be a stay-at-home parent after they got married because as a federal postal employee, DOMA prevents Nancy from covering Marcelle on her employee health insurance plan. “We know that not all families can afford it, but we were willing to sacrifice my income to do what was best for our family,” Marcelle stated. “But because of DOMA, we couldn’t take this extra step to care for our children. I had to remain in the workforce in order to have access to health insurance.”

If you know Nancy and Marcelle, you know they’re devoted to their children above all else. (They even took them along on their honeymoon to Cape Cod after they got married in 2004!) They did a fantastic job articulating the emotional and financial toll that DOMA takes on real, hardworking families.

After Nancy and Marcelle did two TV interviews, it was off to lunch at the Rayburn House cafeteria -- the birthplace of Freedom Fries. Then Amy led us over to the Dirksen Senate Office Building for the 2 p.m. press conference held by Sen. Dianne Feinstein of California, who announced the filing of DOMA repeal legislation in the Senate. This is the first time Rep. Nadler’s bill has a companion Senate bill, so it’s a pretty big deal. Noting that there are 18,000 legally married same-sex couples in her home state who are raising kids, sharing the bills and caring for each other come what may, Sen. Feinstein -- who voted against DOMA in 1996 said, “because of DOMA they have been denied federal protections. It is time to right this wrong.” She was joined by Sens. Richard Blumenthal, Chris Coons and Kirsten Gillibrand and two married same-sex couples who shared their stories of how DOMA has harmed their families.

We wrapped up this great day with a visit to the White House, which we all agreed looks a little smaller than we imagined. Nancy asked a security guard if President Obama was home, and whether he’d like to come out and visit. Apparently, he was out. Oh well, his loss.

You can view videos of both press conferences in their entirety at the LGBT blog Towleroad.