Fighting For Our Rights Shows Our 'True Colors' 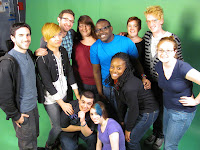 As a passionate film student, I am eager to jump at any chance I have to be on set. So, when Amanda at GLAD approached me to help out on April 1st & 2nd’s LGBTQ youth rights shoot, “no” was the farthest thing from my mind.

Going into the shoot, I wasn’t sure what to expect. I know how to turn on a camera; I’ve fetched coffee for many a director; and I know the basic lighting skills. However, every time on set is an opportunity to learn more. Going into this project, I didn’t know the director or the actors, unlike most of the student films I have been involved with in the past. Anything could happen. That, for me, was thrilling.

On Friday evening, after rushing into a part of Boston unknown to me after a day’s worth of classes, I finally arrived at the Boston Center for the Arts (BCA). There, I was introduced to Evelyn and the actors from True Colors Out Youth Theater, the youth troupe at the Theater Offensive. Earlier in the week, the youth had collaborated on a script explaining the rights of LGBTQ students in Massachusetts public schools, hashing through the legal jargon to create a straightforward script in their own words. In pairs, the young actors took turns reading the script as Seth, the director, listened in on their individual rehearsals. Though everyone was reading the same script, there were six different stories in those words. Hearing the different voices, different inflections, different ways of empathizing, only got me more excited for the real shoot the next morning.

After the acting exercises, we joined together again to discuss the true stories behind the words in the script. These youth, ranging from sixteen to twenty, each had experienced bullying throughout their time at school. For the most part, the school administration had not addressed the issues and instead they were left to fend for themselves, though luckily, most had a strong base of friends and supporters to help them through. While these stories tore at my heartstrings, they also got me riled up, as they did most of the actors. After someone shared a story, it led to a passionate discussion about what we would have done in that situation or how it should have been handled, but unfortunately wasn’t. Though I was there as another pair of hands, these youth were my age and in that moment, though I had only known them a couple hours, I felt bonded with them in fighting for equality.

The next morning, I arrived back at the BCA at nine a.m. Running on little sleep after crashing on a friend’s couch in the city, I was much in need of a caffeine fix. However, I am no stranger to early morning shoots. Seth had arrived with Josh, his production assistant, and a sedan packed to the brim with equipment. I helped unload the car and lug everything up four stories of a winding staircase to the True Colors rehearsal room. Away from my bubble at school, I learned a lot from simply watching Seth and Josh setup. Most of the equipment was familiar, but I was intrigued by some of the new contraptions Seth had brought along, and learned some tricks I tucked away for my next personal film projects.

Noon rolled around and the True Colors actors were ready for camera. While most of them are seasoned veterans on stage, many have not spent much time on camera. It was amazing watching Seth pull sincere and energetic performances from the actors. However, what was most exciting was seeing the deliveries from the actors once they got warmed up. Ranging from sweet and sympathetic Julia to energetic Anzel to fiery Emma, the same script was read six times, but it never sounded the same. Each personality colored the script in a unique way. Each actor had about a thirty minutes session on camera, going over the script numerous times. While that can be an exhausting task for any actor, the True Colors youth were putting their whole being into their performance. As the day went on, I had heard the script at least thirty times, but it never got old.

As we all helped pack up Seth’s equipment, the bonding that had begun the previous night continued. We had just finished a lengthy day of shooting, but everyone knew we had completed something meaningful and amazing. Some of us exchanged contact information, hoping to meet up again soon. The excitement was present in everyone involved. This video would be shown at youth workshops, and distributed online, hopefully reaching students across the state. I could only imagine some scared and lonely high schooler stumbling across this video and feeling empowered after hearing his rights explained to him from his peers.

With the camera packed away and everyone ready to head home, we bid farewell and went our separate ways. However, the pride of a job well done and the impact of the project we had completed were instilled in all of us. The experience of that weekend will stick with me for a long time. Beyond simply the technical skills, I was fortunate enough to work with some very talented individuals. Their energy surrounding this project is contagious just remembering it. It’s projects like this, and youth like those from True Colors that make the biggest of differences in the end.