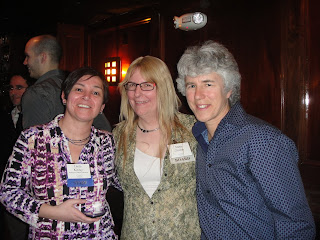 Wednesday night presented GLAD fans with two great choices: head to Cambridge for MIT’s panel discussion “The Future of Marriage,” featuring our own Mary Bonauto and other experts, or stop by Lir, the Boston pub that hosted “GLADHour,” a social event where Jennifer Levi, the director of our Transgender Rights Project (TRP), gave an informative and inspiring update on GLAD’s trans advocacy work. I chose the latter event, and it was an awesome night, despite an interesting Twitter twist – but more on that later.

About 110 guests crowded into the upstairs bar at Lir, located on Boylston Street, among them Boston City Councilor Ayanna Pressley, who stopped by after reading about GLADHour in Bay Windows. Councilor Pressley recently co-sponsored a resolution calling on the legislature to pass the Transgender Equal Rights Bill, on which GLAD is working diligently to pass as part of the Transgender Equal Rights Coalition.

Wednesday’s GLADHour was hosted by board member Dana Zircher, a Microsoft software tech and one of the stars of our educational video “Everyone Matters: Dignity and Safety for Transgender People.” Dana introduced “the fabulous” Jennifer Levi, who took the mic and immediately noted, “I’m just blown away by the turnout here tonight.”

“I don’t know if it’s the downtown bar, free food, Dana, me or GLAD,” she added, “but either way I’m just glad to see everybody here.”

She then went on to reflect on her recent testimony in favor of a transgender nondiscrimination bill in Connecticut, where she fielded an hour’s worth of questions from state legislators. “[It] was a really intense experience,” she told the crowd, “because it was one of the times that I really thought about the fact that I had to take the discussion to a very personal level because the questions that I was being asked about bringing non-discrimination laws into being in Connecticut, and the ways in which transgender people and gender non-conforming people ‘threaten’ other people, was a personal attack on my life. And I was really proud to stand up on behalf of the community and say we are not a threat, we don’t threaten anyone else’s safety, but the absence of nondiscrimination laws is threatening our safety and we need to get them passed and we need to get them passed now.” That’s not just true for Connecticut, Jennifer added, but it’s also true for Massachusetts and for Maine, where a Republican lawmaker is trying to roll back existing nondiscrimination protections for transgender people.

Jennifer also discussed two recent TRP legal victories – the first in Adams v. Bureau of Prisons, a suit that challenged the federal Bureau of Prisons policy prohibiting medical care for transgender inmates who entered the BOP system without a treatment plan for transition. GLAD won the right of our client, Vanessa Adams, to receive life-saving transition-related care that was previously denied because she was diagnosed with Gender Identity Disorder post-incarceration.

The second victory is Freeman v. Denny’s, where we represented Brianna Freeman, a transgender woman who was barred from using the women’s restroom at a Denny’s franchise in Maine, despite the state’s trans-inclusive non-discrimination laws. GLAD is nearing final resolution in that case, but Jennifer made clear that Denny’s has agreed to allow Brianna to use the women's restroom. “[It] is the right outcome,” she said, “and again, we can’t back down from the full comprehensive protections under the law.” Which leads me to that Twitter twist I mentioned earlier. I tweeted Jennifer’s comments about the Freeman victory, much to the delight, apparently, of the potty-minded folks over at the Family Research Council. Peter Sprigg, FRC’s senior fellow for policy studies, re-tweeted my comment prefaced with one of his own, which you can see here: 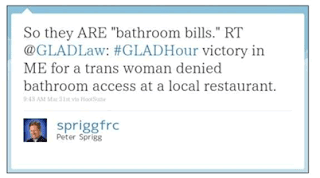 It was hard to know whether to respond, not because we don’t have plenty to say when opponents of LGBT equality try to distract focus from the real issues with false assertions, but really, why get into it with FRC? But lawyers always want the last word, so Jennifer tweeted a reply: “Yes, non-discrimination laws ensure that transgender people can use essential facilities like bathrooms.”

Additionally, in typical lawyerly fashion, Jennifer couldn’t limit her reply to 140 characters. Here’s her 629-character response, which pretty much sums up the true motivations behind FRC’s potty-talk:

“Yes, non-discrimination laws ensure that transgender people can use essential facilities like bathrooms. The alternative – keeping us out – is cruel. BUT let this be unmistakable, at the heart of such laws are protections to ensure that transgender people can work, go to school, and get housing – in short, to be able to provide for ourselves and for our families. Don't
doubt that those who oppose such protections, who flippantly characterize them as ‘bathroom bills,’ want to keep transgender people out of the boardrooms, shopping aisles, and movie theatres, as much or more than they want to keep us out of bathrooms.”
Posted by Laura Kiritsy at 2:21 PM