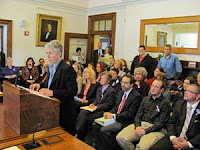 GLAD has been working intensely over the past couple of weeks as part of a coalition of LGBT organizations, civil rights groups and concerned citizens and allies in Maine to defeat LD 1046, a bill that would repeal a vital portion of the Maine Human Rights Act and prevent transgender Mainers from using public restrooms and locker room facilities consistent with their gender identity and expression by restricting access to sex-segregated public facilities based on “biological sex.”

On Tuesday, April 12 I made the trek to the State House in Augusta to deliver 10 minutes of expert testimony – against LD 1046 before the Joint Standing Committee on the Judiciary. I joined several of my GLAD colleagues and representatives from many of our coalition partners – among them MaineTransNet, EqualityMaine, the Maine Civil Liberties Union, the Maine Women’s Lobby and GLSEN, in a hearing room that was packed mostly with transgender Mainers and others eagerly awaiting their turn to speak against this bill.

The committee heard from inspiring folks like Max Katler, a young trans law student who had been living quietly with his wife on their farm, rarely disclosing his transgender status to anyone, until he turned up to testify, out of concern for his safety and dignity should this bill pass. They heard from Jean Vermette, who has long toiled on behalf of Maine's trans community. They also heard from Wayne Maines, a dad who relocated his family to another city to protect his daughter from the anti-trans bullying and harassment she endured in her middle school. As the first transgender Mainer to testify at the hearing, celebrated author and Colby College professor Jennifer Finney Boylan clearly impacted the committee.

I left the hearing feeling energized and positive about our ability to kill this misguided effort to partially repeal the Maine Human Rights Act. No matter how this turns out we made a proud showing before our legislators. I was struck by the beauty of our community, by the eloquence of colleagues and friends, and moved by the rightness of our position.

For nearly six years, trans people throughout Maine have been protected by state laws. I am convinced that those protections have ensured that some hard-working transgender people have been able to get and retain jobs they otherwise would not have. I have no doubt that the laws have ensured that transgender youth could remain in school when they previously would not have. And I am certain it has enabled some transgender people who previously had avoided restaurants and other public places for fear of being discriminated against to go to them and regularize their daily lives. Given the history of discrimination we have faced, we need full and trans-specific civil rights protections without exceptions or exclusions to even begin getting to a place of inclusion, much less acceptance and support.

For the second time in less than a month, I had the chance to testify before legislators about the importance of respecting the humanity of transgender people’s lives. I am happy to field the questions that some will only ask if they feel safe enough to voice their uncertainty and reveal their ignorance (and I mean this to be descriptive, not judgmental) of our lives.

The more I hear the questions, the more confident I am in our answers: First, nobody transitions as a lark or to cause mischief (whether in bathrooms or elsewhere). A person’s gender identity is well-established at a very early age (not changeable or susceptible to any kind of so-called reparative therapy). If we don’t support our young people, they are at great risk of physical and psychological harm. And finally, so-called “biological rules” are impossible to police in any non-discriminatory way and, regardless, are insupportable by medical standards or science -- which increasingly recognize gender identity or brain sex as the only true determinant of a person’s sex.

The four-plus hour hearing in Maine is part of the educational arc we must draw to protect advances in this social justice movement. No matter how many repeal efforts we face (and this effort in Maine is an important reminder that the passage of trans-inclusive laws marks only the end of the beginning of our work), we cannot help but continue to move forward in our effort for full inclusion of transgender people in our society. We are human, our lives are worthy of respect and dignity and together, along with our friends and allies, we will convince even those to whom our lives and truths are new that we are their brothers and sisters.

View YouTube video of Jennifer testifying at the hearing here. Her testimony begins around the 47-minute mark.

First of all, thank you for your testimony. I was there, and I was truly impressed and given hope by your strength, accuracy and extensive experience in defending trans people.

I do want to address something that you mentioned in this blog post. Establishing "facts" that are true of "all trans people" in an attempt to win victories is probably a good idea. There are pervasive myths rooted in basic fears of the unknown that strategically it may be appropriate to counter at times. However, we should remain very aware of what is strategic and what is true. To assert that all people's gender identity is fixed in early childhood and cannot change may be useful in defending trans people against those who say that our gender "transgression" must be justified, but when we speak to each other we should remember that the larger truth is that no one should require permission of any kind to transgress any gender norm, and the policing of gender is never appropriate. Gender is in fact not necessarily fixed throughout life, a position I share with transgender pioneer Leslie Feinberg, who rejected the idea of the gender as static for all people.

Gender variant, genderqueer, and gender transgressing people are impassioned supporters, on the whole, of transgender and transsexual rights. This is not something I would want to see stop. My email is zeraph.moore@gmail.com if want to respond but prefer to contact me privately.

Jennifer, thank you so much for your amazing testimony this week. As a trans ally, I am always looking for more ways to constructively engage people in discussions about trans issues and rights. Your words have been very helpful in that. Keep doing what you do!
with love & solidarity,
Mary