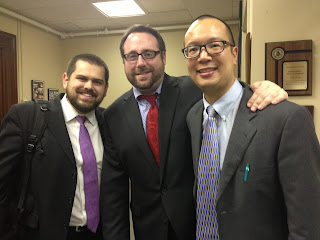 
For a little state, Rhode Island made a big showing last Tuesday. Hundreds of citizens gathered that evening  at the state house for the House Judiciary Committee hearing on what is the 17th and hopefully final marriage equality bill to be filed in the Ocean State.

With prayer circles in the house rotunda, and same-sex couples holding signs of love in the hallway, supporters and opponents of marriage equality mixed outside the hearing room in a rare and, honestly, inspiring showing of civic participation, even as passions ran high.

One conversation I had, while waiting in the hallway to greet our testifiers, was with an ex-gay minister. He told me his story of finding God after a violent incident with a same-sex lover that almost killed him. As I listened to him, feelings of sadness, admiration, disbelief, and sympathy ran through me as I tried to make sense of it. I was struck that someone with whom I shared so much in common could be in such a different place in life, but heartened that, while we were at the State House for opposing reasons, we were still able to come together to share our stories with one another.

Meanwhile, inside the overheated and packed committee room, testifiers rose one by one for the next 6 hours to give their two minutes of testimony in support of or opposition to the legislation.

For the opponents, representatives from the Catholic Church, the National Organization for Marriage, and the Ruth Institute made false claims about threats to religious liberty, children in schools, and the future of the human race.

For our side, GLAD, as part of our new coalition RhodeIslanders United for Marriage, helped organize panels of expert testifiers in areas as diverse as labor, faith, education, and medicine and psychology -- all ready to counter any argument that our opponents might make.

But as we have learned in the other 5 New England states with marriage equality, what ultimately moves people are personal stories. Stories like those of Lise Iwon, who lost her wife Peg after 32 years together, yet still showed up that night to talk about why being able to marry in their home state was so important to them both. David Olson, who despite getting a civil union in Rhode Island with his partner Len, was still told by his employer that the pension survivor benefits that his married straight coworkers could receive was "not applicable" in his situation because there was "no spouse." And Matthew Lannon, 12 years old, who simply wanted to know why his two dads could not get married.

After so many years of trying to pass marriage equality in Rhode Island, hopefully this will finally be the year that Rhode Island, with GLAD and our coalition partners’ help, joins the rest of New England in protecting and valuing all families. Many of the folk in the state house Tuesday night will no doubt view that as the ultimate defeat. What I hope is that, just like what brought that ex-gay minister and myself together that evening, one day what we all share in common will ultimately bring us back to the same place, together.

See more photos from the hearing at Freedom to Marry's website.
Posted by GLAD at 2:28 PM