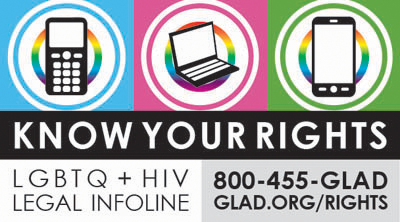 One of the great things about living in New England is that all six states offer anti-discrimination protections for LGBT employees and workers who are living with HIV.  Most workers are “employees at will” and can be fired or discriminated against by their employer for any reason or no reason at all.  However, states have identified “protected characteristics” and made it illegal to fire or discriminate against an employee just because they possess, or are perceived to possess, one or more of those characteristics.  For lesbian, gay or bisexual (LGB) workers, the protected characteristic is “sexual orientation,” for workers living with HIV, “disability,” and for transgender workers, “gender identity.”

If you encounter a situation at work or when applying for a job where you feel that you have been discriminated against, and the reason for the discrimination is simply because you possess, or are perceived to possess, one or more of your state’s protected characteristics, the first step is usually to try to work out a satisfactory resolution with your employer, or, if you belong to a union, perhaps try to get help from it.

If the attempt to resolve the issue internally fails, you can file a complaint with your state’s anti-discrimination commission—each New England state has one.  The complaint must be filed within a certain time from the last instance of discrimination; this is called the statute of limitations, and, although it varies from state to state, it is somewhere between 180 days and a year.  It is essential that the complaint documents that the discrimination was based on having, or being perceived to have, one or more protected characteristics—i.e., because you are or were perceived to be gay, transgender or a person living with HIV.

Disability is a federally protected characteristic, and so people who are discriminated against on the basis of their HIV status, can file both a state and federal discrimination complaint.

Although the initial complaint usually needs to be filed with the state’s anti-discrimination commission and/or the EEOC, later on, if you want to,  it is possible to move the complaint into the state and/or federal courts.

If this sounds too technical, just remember that if you are LGBT and/or living with HIV, and you are discriminated against at your work because of this, there are strong legal protections in all six New England states.

GLAD’s Legal InfoLine can help you with your particular situation.  Just call 800-455-GLAD (4523) or go to www.glad.org/rights/infoline-contact

For more information about employment discrimination in the New England states, go to www.glad.org/rights/topics/c/anti-lgbt-discrimination.
Posted by Bruce Bell, InfoLine Manager at 12:25 PM