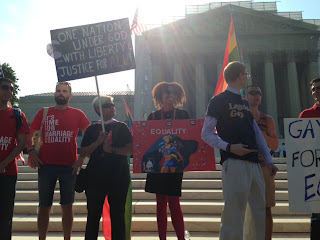 It’s not every day you get to stand at the foot of the marble stairs (quarried from Vermont!) of the U.S. Supreme Court on the day a blockbuster decision related to LGBT rights is handed down. But there I was in the sweltering heat at about 8:00 a.m. yesterday, waiting on two decisions. Though rulings in the Windsor DOMA case and the Perry Prop. 8 case were at least two hours from being handed down, the media was already out in full force, with dozing cameramen seated in folding beach chairs, all shaded by umbrellas. The line of folks hoping to get inside for a front row seat to history was already growing.

It wasn’t long before I caught up with my colleague Mary Bonauto, who laid so much of the foundation on which the Windsor victory was built, as Justin Peters described so well in this piece on Slate yesterday.  As the sun rose higher over the courthouse, we continually moved around in a mostly useless attempt to keep cool.


But soon there was nowhere left to move, as the sidewalk by the court was quickly clogged with LGBT people and allies from around the country, singing and chanting and keeping their hopes high. I was surprised there wasn’t a more visible presence of people who oppose LGBT rights. Maybe they were all in a bunker somewhere, bracing themselves for the end of the world. I did glimpse Brian Brown of the National Organization for Marriage strolling along the edge of the crowd, where no one seemed to notice him. He was still smiling at that point, but I’m guessing his day went a little south after the big news got out.


Prop. 8 attorneys Ted Olson and David Boies, on the other hand, were definitely noticed. Pulling up to the curb in a black SUV, they were instantly engulfed by a swarm of TV cameras, photographers, and reporters with outstretched tape recorders and microphones. It was nice bumping into old friends and friends of GLAD like Jeremy Pittman, the former deputy campaign director at MassEquality who is now the deputy field director at HRC, and Amy Senier, an attorney from Foley Hoag who acted as co-counsel on our Gill DOMA challenge. Amy was wearing a Boston Red Sox cap as a way to represent for our Gill plaintiffs, all of whom hail from Massachusetts. 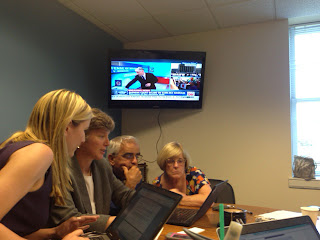 Although I was right in the center of the action and anticipation, as the clock ticked closer to 10:00 a.m., Mary and I retreated to the United Methodist Building next door to the court where the staff graciously let us camp out for the day. Like just about half the country it seemed, we logged on to SCOTUSBlog with a handful of other activists in the room and on the phone from remote locations and held our breath. News of the 5-4 win in Windsor at 10:02 a.m. produced a round of cheers, but people quickly returned to their screens for more detail.

I must say, it was gratifying to see the first quote posted on the blog from Justice Kennedy’s decision: “DOMA singles out a class of persons deemed by a State entitled to recognition and protection to enhance their own liberty.” It sounded a bit like the argument we made in the complaint we filed in our Gill case back in 2009:  “DOMA operated to single out one class of marriages legally recognized by the Commonwealth of Massachusetts, those of same-sex couples, and to deny their existence for all conceivable ends and purposes of federal law.” 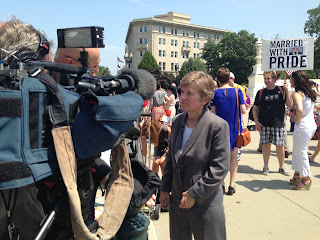 Though it was only about 20 minutes, it felt like an hour before Perry was released. It quickly became clear that the net effect of the case being dismissed was that California was back on the map as a marriage equality state. There were more cheers followed almost immediately by more quiet parsing.

After that, it was back out into the joyful blur of beaming faces and rainbow flags, where Mary was scheduled for interviews with the BBC, CNN and the Washington Post to discuss the decision. The sun seemed to be shining even more brightly.

The rest, as they say, is history.