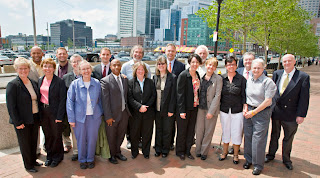 It’s been a busy and exciting couple of weeks here at GLAD as we finish preparing for appellate arguments in Gill v. OPM, one of our two lawsuits challenging the notorious federal Defense of Marriage Act, better known as DOMA. The Boston Globe has a great front-page story today that’s a nice refresher about our case, Attorney General Martha Coakley’s DOMA challenge, and the history of this discriminatory law.

Wednesday, April 4 is a big day at the John Joseph Moakley Courthouse – the arguments start at 10:00 a.m., but if you’re going, plan to be there early because you’re not the only one who doesn’t want to miss this big day. The arguments will take place in the En Banc Courtroom on the 7th floor, which opens at 8:00 a.m.

In case you’ve forgotten, Gill was the lawsuit that prompted federal Judge Joseph Tauro to declare Section 3 of DOMA unconstitutional back in July 2010 – the very first time a federal court had issued such an opinion.

Defending that victory on behalf of our plaintiffs – seven married couples and three widowers – is our very own Mary L. Bonauto, the director of GLAD’s Civil Rights Project. There’s probably not a more skilled, passionate litigator when it comes to arguing for LGBT equality. As the New York Times once observed of her, “Bonauto’s patient, quietly passionate yet self-effacing advocacy may have as far-reaching an effect on America as did that of Thurgood Marshall.”

To be sure, she’s a good match for Paul Clement, the high-profile attorney who will be arguing in favor of DOMA’s constitutionality for the Bipartisan Legal Advisory Group of the U.S. House of Representatives (BLAG), which intervened to defend DOMA after President Obama declared he would no longer defend the law, believing it to be unconstitutional. Clement is fresh from arguing at the U.S. Supreme Court on behalf of 26 states that believe the Affordable Care Act, Obama’s signature healthcare reform law, should be struck down.

Forget The Good Wife, Law & Order, and Damages. This is the real thing, people.

But Gill isn’t the only game in town that day. Maura Healey, the openly gay chief of AG Coakley’s Division of Civil Rights, will also argue that DOMA unconstitutionally forces the state to discriminate against legally married same-sex couples in the case Commonwealth of Mass. v. U.S. Dept. of Health and Human Services. Coakley’s case also delivered a blow to DOMA when Judge Tauro ruled in the state’s favor back in 2010.

We hope to see you there! But if you can’t make it, be sure to check out our regular Facebook and Twitter updates throughout the day. We don't want you to miss a thing.

Posted by Laura Kiritsy at 9:36 AM

Thanks. It should now be fixed.