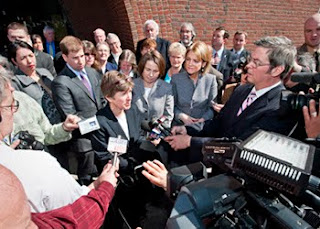 We’re still digesting the mountain of media coverage of yesterday’s historic First Circuit Court of Appeals arguments in our Gill DOMA lawsuit, but we already know the tidbit that makes us most proud – it’s the last line of WBUR reporter Fred Thys’ story: “[Mary] Bonauto and GLAD changed the country in 2003 when the won the lawsuit that legalized gay marriage in Massachusetts,” Thys intones. “Now they’re hoping to change the country again by getting DOMA struck down.”

Now that’s change you can believe in! We do, anyway.

Here’s a sampling of some of the other coverage. This isn’t an exhaustive round-up so if you come across some other article or blog post that you enjoyed, please share it with us.

The New York Times did some nice coverage and the Wall Street Journal ran a piece by the Associated Press.

The Chicago Tribune ran a great piece by Reuters, in which Attorney General Martha Coakley, whose DOMA challenge was also heard yesterday, predicts “we will be victorious,” while Kris Mineau of the anti-LGBT Mass. Family Institute frets that DOMA’s death would force “a radical social agenda on the rest of the 50 states…” Well, maybe someday. But for now, our lawsuit only seeks to ensure that same-sex couples who are already legally married are treated the same as other married couples by the federal government. If we win, it would not mean that other states will be forced to perform or recognize a same-sex marriage. Have we not been making that clear?

Thankfully, attorney Janson Wu pointed this out during his appearance with Mineau on Jim Braude’s Broadside last night. At least Braude seemed to get it. Perhaps Mr. Mineau should take a peek at the Los Angeles Times’ coverage, where they made it pretty clear as well: “At issue is not whether gays and lesbians have a right to marry, but whether the federal government can deny tax, health and pension benefits to same-sex couples in states where they can marry.” Really, this case is not complicated – as is rocket science, or, say, cooking up race-baiting, divide-and-conquer strategies and fabricating lies to prevent same-sex marriage. But I’m really digressing here.

Julie Bolcer of the Advocate magazine gives a thorough play-by-play of the arguments and includes some nice comments from Mary and plaintiffs Bette Jo Green and Jo Ann Whitehead from our post-hearing press conference.

Carol Rose, executive director of the ACLU of Massachusetts, detailed the arguments at On Liberty, her Boston.com blog. Rose zeroed in on the final moments of the proceedings, when Justice Torruella asked BLAG attorney Paul Clement whether Congress could pass a law recognizing marriages only between people of the same race without violating the Constitution. “It's a good question,” Rose observed, “and one that wasn't adequately answered by Clement, and can never adequately be answered by Congress or anyone else who thinks that it's okay to deny equal protection of the law.”

And last, but certainly not least, plaintiff Dean Hara, the widower of the late Congressman Gerry Studds, shares his reflections in an op-ed published on the Boston Globe’s blog The Podium.

“We are all pro-family. We all came from families. Our families share the same concerns. Economic issues and life’s uncertainties impact us all,” Dean writes. “My co-plaintiffs Mary Ritchie and Kathy Bush worry about having less money to put away for their boys’ college education because they cannot file their federal taxes jointly, or what happens if Mary, a State Police lieutenant, is killed in the line of duty. Al Koski, a retired employee of the Social Security administration, cannot qualify for a family health insurance plan to cover his spouse Jim Fitzgerald. All other married employees and retirees have that security.”

That’s exactly what we’re fighting for here at GLAD – the right to protect our families in the same ways that other Americans can. That’d be a great change for our country, indeed.

UPDATE: National Law Journal also has a great piece with a lot of backstory and even discussion of the amici filed on both sides of the case (Who does that? We love it.)

Mass. Lawyer's Weekly also covered the arguments on their blog, The Docket.

And, in case you missed our posts from yesterday, Chris Geidner at D.C.'s Metroweekly did a whole slew of Gill coverage that you must check out. You can get to it all from here.

ANOTHER UPDATE (so much great coverage, we can't help ourselves): The Washington Blade's Chris Johnson also did some must-read coverage of the arguments and the aftermath, including reflections from Mary and plaintiffs like Nancy Gill, who summed up the fight against DOMA very succintly with this quote: "We can't fathom how anybody can make an argument against a relationship that's 31 years old. We've been married for eight, have two children. We add to society, and we just want to make sure that we have the same rights and protections that our other married friends have." Check it out.

The Courage Campaign, the great folks who brought you ringside for the Perry Prop. 8 trial, gave the Gill arguments the full treatment via their blog, Prop8 Trial Tracker. They followed up with some interesting big-picture analysis of the DOJ's evolving stance on DOMA.

Without a doubt, the most detailed report of the proceedings came from veteran reporters Chuck Colbert and Lisa Keen, published in The Rainbow Times. From details about Chief Judge Sandra Lynch's history adjudicating gay-related cases and Mary's "fashionable glasses" to which of the four lawyers that argued is gay (hint: Paul Clement isn't one of them), you'll feel like you were sitting on the bench yourself. Then there was their observation that Gill is "the case everybody knows is heading to the U.S. Supreme Court and, perhaps, for the history books, along with the 2003 Lawrence v. Texas which struck down laws against same-sex sexual relations." Another proud moment for GLAD to be sure, although we really don't know how or where this case will end. But we like where Chuck and Lisa are going with this.

Posted by Laura Kiritsy at 2:01 PM

Email ThisBlogThis!Share to TwitterShare to FacebookShare to Pinterest
Labels: http://www.blogger.com/img/blank.gif