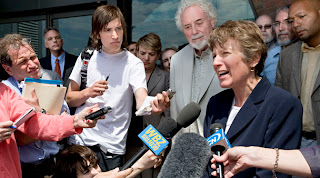 For the first time this Wednesday, a Federal Appeals Court will hear arguments about the constitutionality of the federal Defense of Marriage Act (DOMA). Seven married same-sex couples and three widowers, plaintiffs in GLAD’s case Gill v. Office of Personnel Management, will go to the U.S. Court of Appeals for the First Circuit to hear appellate arguments in their challenge to the law, which prevents them from accessing federal spousal protections as other married couples can.

In a July 2010 ruling in Gill - the first strategic, multi-plaintiff challenge to DOMA - District Court Judge Joseph L. Tauro ruled Section 3 of the federal law unconstitutional. Republican leadership in Congress intervened to appeal that ruling, after President Obama declared he would no longer defend DOMA.

We will be posting updates on the hearing throughout the day on Twitter and Facebook, and will provide a complete wrap up – including a link to audio from the argument provided by the court – here and at www.glad.org after the hearing concludes.

For more information about the case and the plaintiffs, visit www.glad.org/DOMA