The Promise of Equal Protection 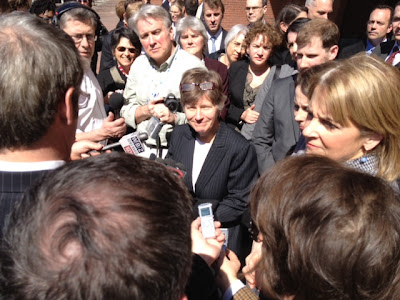 What a great day.

Our arguments at the First Circuit Court of Appeals in Gill v. OPM, one of our two DOMA lawsuits, wrapped up at 11:00 a.m. this morning, and we’re very confident we got a fair hearing.

The three justices who heard our case listened attentively – and with few interruptions – to arguments by GLAD’s Mary Bonauto as to why DOMA is unconstitutional.

As Chief Justice Sandra Lynch said at the close of the hearing – after praising the “superb arguments” delivered by both sides: “We’ve learned a lot.”

The 7th floor En Banc courtroom at the Joseph Moakley Courthouse was packed to overflowing by about 8:00 a.m., and our arguments didn’t even start until 10:00.

Our plaintiffs in the case, who came from as far away as Sandisfield – way, way out in Western Mass. – and Cape Cod, were all there, and their excitement was palpable.

Joining them in the courtroom were notables such as Attorney General Martha Coakley, whose own challenge to DOMA, Commonwealth v. U.S. Office of Health and Human Services, was being argued by Maura Healey, the AG’s Division of Civil Rights chief; retired Supreme Judicial Court Justice Judith Cowin (who joined the majority in our historic Goodridge case); and LGBT historian George Chauncey.

The highlight of the morning, of course, was hearing Mary make the case for our plaintiffs – and for all of the married same-sex couples in this country who are being denied a critical safety net because the federal government refuses to recognize their marriages. She argued that to this day, the federal government defers to the state marriage laws when distributing federal marriage protections and responsibilities. “But for DOMA,” she said, “same-sex couples who began marrying here eight years ago would have been included in those federal laws. DOMA’s precise point was to prevent that inclusion and create an across the board exclusion in the U.S. Code. The promise of equal protection is that likes are to be treated alike – but DOMA treats married same-sex couples differently from all other married persons making gay people and our marriages unequal to all others.”

Mary skillfully rebutted every argument made by attorney Paul Clement, who is defending DOMA on behalf of the Bipartisan Legal Advisory Group of the U.S. House of Representatives (BLAG) now that the Obama Administration has dropped its defense of the law. GLAD attorney Janson Wu, a member of our expert DOMA legal team, said Mary “could not have done better in her arguments. She was spot on.” But yes, we’re all biased here at GLAD. But judge for yourself – you can hear audio of Mary’s arguments at the court’s website (unfortunately, due to a technical error Paul Clement’s opening arguments weren’t recorded, so you won’t hear those). Metroweekly reporter Chris Geidner also has an excellent play-by-play of the arguments that makes things pretty clear.

Following the hearing, Mary and our plaintiffs headed outside for a press conference where they continued to make the case for why the court needs to dump DOMA. Check it out here. We’ll keep making the case in the courts, in the media, and just about anywhere else we can, until DOMA is pitched into history’s dustbin. Stay tuned!

Posted by Laura Kiritsy at 4:01 PM