30 Years and the Work Continues: Winning Legal Protections for People with HIV 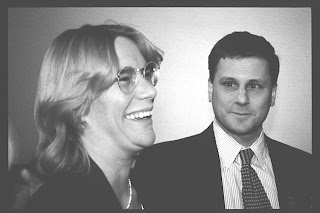 AIDS Law Project Director Ben Klein, with Sydney Abbott
On June 5, 1981 the U.S. Centers for Disease Control and Prevention’s Morbidity and Mortality Weekly Report published a report on five previously healthy gay men in Los Angeles who had all been diagnosed with the same very rare form of pneumonia. Two of the men were already dead. It was the first documentation in medical literature of the disease we now know as AIDS.

GLAD’s earliest HIV/AIDS cases reflected fear, uncertainty about how HIV was transmitted and the urgency of a life-threatening crisis. For example, in 1983 GLAD and AIDS Action Committee convinced Beth Israel Hospital to abandon its policy of placing all patients identified as being “high risk” for AIDS on blood and bodily secretion precautions – a policy that singled out gay men, Haitians, intravenous drug users and hemophiliacs who came to the hospital even for reasons unrelated to AIDS. In 1985, we brought one of the first employment discrimination cases in Massachusetts against a company that refused a gay man’s return to work after a period of sick leave because his co-workers feared he had AIDS.

The AIDS crisis also highlighted the utter lack of legal protections for same-sex couples. In 1987, before John Reilly succumbed to AIDS, he asked that his partner, Kevin Clarke cremate him and store his ashes in his favorite piece of Rose Fiestaware. The hospital, however, turned John’s body over to his estranged mother, who refused to abide by her son’s wishes. GLAD and cooperating attorney Gary Buseck, who’s now GLAD’s legal director, filed suit and won the return of John’s ashes to Kevin.

In 1994, Sydney Abbott’s dentist in Maine refused to treat her because of her HIV status. With AIDS Law Project Director Ben Klein as lead counsel, GLAD fought for Sydney’s right to treatment all the way to a U.S. Supreme Court victory in 1998, a trailblazing lawsuit that marked the first time the high court heard an HIV/AIDS case. The Supreme Court’s Bragdon v. Abbott ruling established nationwide protection against discrimination under the Americans with Disabilities Act for all people with HIV.

Thirty years on, an HIV diagnosis no longer equals a rapid decline and painful death. Medical advances have enabled people to lead healthy, productive and long lives. Legal advances ensure that they do so with dignity and privacy, and GLAD is proud to have played a part in bringing about those changes.

Until there is a cure, however, we remain vigilant. “Medical progress has given rise to new legal issues,” Klein observes. “Many of the cases we are seeing today are arising because people with HIV are now living long lives.”

Two prominent examples of this phenomenon came in 2001. GLAD successfully represented Belynda Dunn, a beloved AIDS activist who was dying from end-stage liver disease from Hepatitis C. Dunn was denied a liver transplant by her private HMO on the grounds the treatment was experimental because of her HIV status. Likewise, we successfully sued MassHealth, the state Medicaid agency, after it denied an anonymous client (“John Doe”) a liver transplant on the same grounds. Both Dunn and Doe received their transplants, and because of these cases, both public and private health insurers began covering transplants for HIV positive patients.

GLAD is also combating insurers who routinely refuse coverage for treatment of lipodystrophy, a condition many experience as a disfiguring, debilitating side effect of the medications that are allowing people with HIV to live long, productive lives. In 2008, the Massachusetts Court of Appeals ruled in favor of our 15-year-old plaintiff Ashley Shaw in her fight to get MassHealth coverage for doctor-recommended surgery to alleviate a large fat pad from the back of her neck, a manifestation of lipodystrophy. In 2010, GLAD successfully represented Amit Dixit in his fight to get his HMO to cover liposuction surgery, after the insurer initially refused coverage on the grounds that it was merely cosmetic.

While the fear of HIV has abated, is hasn’t disappeared. In 2008, GLAD filed a lawsuit that allowed AIDS Services of Monadnock Region (ASMR) to operate a group home for people with HIV in Gilsum, New Hampshire, without many of the onerous restrictions the town previously imposed, including restrictions on people with criminal convictions or histories of substance abuse.

“It’s clear,” says Klein, “that while the face of the epidemic has changed dramatically over the last 30 years, stigma about HIV remains too common and the need for strong legal protections is as critical as ever.”

And so, the work continues.

Email ThisBlogThis!Share to TwitterShare to FacebookShare to Pinterest
Labels: HIV/AIDS