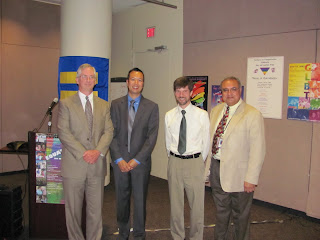 Yesterday, I had the honor of delivering the keynote speech to a number of amazing directors and employees at the Massachusetts’ Department of Transportation’s annual LGBT diversity luncheon. It was one of our more unusual requests, but to be honest, I was very excited to do it. I have to confess, I’m a little bit of an urban planning and traffic geek. I find traffic science fascinating, maps mesmerizing, and public transportation exciting. I even like to brag about my ability to predict exactly how long it will take to get anywhere on the T – no matter the day of the week or time of night.

So, being able to talk to the brand new T worker whose lesbian daughter is getting married this September, or the Director of the DOT’s Civil Rights Department, whose teenage son just came out, was just a total privilege.

If only I could have scored a T discount as well!

Here’s the speech I delivered at the event. Happy Pride!

What a wonderful way to kick off Pride Week, which culminates this Saturday in the Pride Parade and celebration at City Hall. I wanted to talk a little today about why I believe Pride celebrations are so incredibly important still, despite all of the progress that we’ve made on LGBT rights in the last few years.

You see, Pride is not just about a bunch of extremely well-dressed drag queens dancing on incredibly well-decorated floats covered in way too many rainbow flags. (Although, that certainly is an integral part of any Pride parade.)

Instead, I don’t think it is an overstatement to say that Pride began as a survival response from a community that was literally besieged with hatred, discrimination and violence, often at the hands of our own government.

The very first pride march happened on June 28, 1970 to commemorate the Stonewall Riots in NYC, where the LGBT community fought back for the first time against systematic police raids of known gay bars, including the regular beating and arresting of then men who were in these bars simply trying to build a community together. However, the Stonewall Riots did not come out of the blue. It was the expression of long pent-up anger and humiliation due to decades of severe and pervasive persecution, discrimination and violence against LGBT people.

It is so important that we remember this history in order to fully appreciate the meaning of Pride. For example, beginning in the 1930s and 1940s, many states, including Massachusetts, prohibited openly gay people from being served in bars and restaurants. That’s right – many restaurants literally would have signs in their windows saying, “We do not serve homosexuals,” and it was legal. Here in Boston, even as late as 1965, the city council attempted raze to the ground all the gay bars in the city, as part of a campaign to destroy these “incubators of homosexuality and indecency,” as one city councilor put it.

From the 1950s until the 1970s, the federal government banned the hiring and employment of gay people, in effect waging a witch hunt for gay federal employees that destroyed countless lives. The federal government also targeted and quashed any LGBT political organizing, including seizing membership lists, arresting LGBT organizers in their own homes, and prohibiting the mailing of LGBT political publications through the post office.

And until the 1960s, being gay was a crime in every single state in this country. And it was not until 2003 that the U.S. Supreme Court finally overturned the remaining 13 state laws that criminalized same-sex sexual intimacy.

We don’t have time to go through the entire history of the LGBT movement, but I really encourage all of you to learn about this history, because it’s only with a full understanding of this history that we can fully appreciate the gains that we’ve made.

At the same time that we have made progress, there are still some shocking deficiencies. For example, today, it is wonderful that gay and lesbian couples can marry in 5 states, including MA, as well as the District of Columbia. At the same time, only 16 states and the District of Columbia allow s-s couples jointly to adopt a child, and until very recently, Florida and Arkansas even prohibited any gay person from being a foster or adoptive parent, even if it were in the best interests of the child.

And while I am proud that Massachusetts has had sexual orientation antidiscrimination protections since 1989 (the second state in the country to pass such a law), there are still almost 30 states where you can be fired, evicted, or refused service in a restaurant for being gay or lesbian. And Congress has yet to pass a federal anti-discrimination law for LGBT workers, despite efforts for the last 2 decades to pass such protections.

Even in Massachusetts, our existing anti-discrimination protections do not extend to transgender people. It’s for that reason that I applaud the Governor for recently instituting an executive order protecting all transgender state employees from discrimination on the job, and I know that the Department of Transportation is committed to implementing that anti-discrimination policy in a way that is thoughtful and respectful to all involved. What a powerful message that sends to our society.

All of which brings me back to the importance of Pride. Again, I believe that Pride remains important because it reminds us of the painful history of discrimination and violence against LGBT people, it commemorates every year the incredible progress that we have made, and it hopefully inspires us to continue to work toward the full equality of LGBT people in our commonwealth and in our country.

However, the primary reason why I think Pride is so important is because of the message that it sends to our children that it is not only ok to be gay or transgender, but it is ok to be proud of who are. And that they can be proud of who they are and continued to be loved and protected by the adults around them. This is so particularly important to LGBT youth, who are coming out at even younger ages and still sadly face a hostile world intent on destroying their sense of self-worth, as evidenced by the epidemic of LGBT youth suicides in the last few years.

The only way we can counter these horrible tragedies is to engender a sense of positive self-worth and self-esteem in our youth through example, through Pride – by convincing them not only does it get better, but we as parents, relatives, teachers, and friends will do everything in our power to make it better for them.

I’d like to end by reading something by one such parent doing everything he can to make it better. He is the father of a 4th grade transgender daughter who was so severely harassed in her elementary school in Maine that he and his wife were forced to move to another school district to protect her safety. GLAD is representing this family in their lawsuit against the school district for failing to adequately protect this girl.

This father, his family and in particular his daughter, are my heroes for this year’s Pride. But this father wasn’t always such a champion for his daughter. Here is an excerpt of a piece he wrote about coming to fully accept his transgender daughter:

A year ago I took my daughter to a college class to hear a transgender college professor talk about her life. I wanted her to see that there are a number of strong, successful transgender women that she can admire and emulate as she continues to develop her own core values. Sitting proudly in that classroom as a changed man, I don’t like to think about what I may have said if that same transgender professor had come to my classroom 25 years ago.

My 12 year old transgender daughter is my mentor. It’s tough to put into words what a profound impact this small person has had in changing my core values, but since the young age of five, she has unknowingly encouraged me to open my eyes and heart to new ideas. It hasn’t been easy. I’ve watched her experience severe emotional pain and physical frustration, but thanks to support and guidance, I’ve watched as she’s become a confident, happy and healthy child. And as she changed, I changed too.

Pride is also ultimately about change. It’s about celebrating the change that we’ve accomplished over the last 40 years since Stonewall, from when you could have been beaten and arrested for going to a gay bar to today, when our own Governor marches proudly in the Pride parade.

And finally, it’s about changing our culture from one where a gay joke here or there is no longer seen as something to be tolerated, or worse, funny. Rather, it’s about changing toward a culture where we take full responsibility for the messages that we send to our kids, a message that by fully respecting and accepting people, not just despite but because of our differences, we celebrate our common humanity and hopefully teach others to do the same. Pride is all about the examples that we choose to set, generation after generation, one rainbow flag at a time.