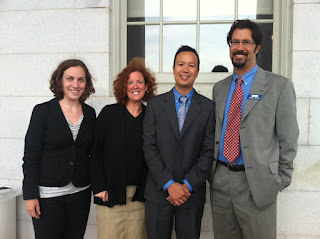 
Tuesday night at 10:30 pm, in a vote of 81-61, the Maine House of Representatives voted down LD 1046, a bill that would have repealed protections for transgender individuals to use the restroom that matches their lived gender. Wednesday morning, the Maine Senate finished the job with a vote of 23-11 to kill the bill. It is hard to overstate what a horrible outcome it would have been for this bill to pass, and GLAD (including Jennifer Levi, Mary Bonauto, Laura Kiritsy and myself) was proud to work tirelessly with our coalition partners (including Maine TransNet, MaineEquality, the Maine Civil Liberties Union, the Maine Women’s Lobby, and the Maine chapter of GLSEN) to ensure that these vital human rights protections were not rolled back for transgender people.

I knew it was going to be a late night when I got in the car Tuesday at 2:30 pm to make the 3 hour journey to Augusta. When I left, our lobbyists were still “cautiously optimistic” about our vote count, but we all understood that the situation was fluid, and having a GLAD attorney on hand would be helpful in case any last minute amendments came up that needed to be analyzed. Others were on call through cell phones, including Maine’s trans community leaders, in case any last minute decisions needed to be made.

This most recent campaign to strip rights away from transgender individuals, to some extent, was motivated by two of GLAD’s cases – both cases that I’ve worked on with my colleagues Jennifer Levi and Ben Klein. The first was GLAD’s case against Denny’s restaurant for refusing to allow a transgender woman to use the women’s restroom, which recently settled very favorably for our client. The second case is an ongoing case against the Orono School District for failing to protect a transgender girl from harassment and bullying as well as excluding her from using the girl’s bathroom, which further stigmatized and targeted her for being transgender.

At the state house, the mood of our lobbying team remained cautiously optimistic, but as the night went on, things looked better and better. Representative Priest, one of our major champions, stood first to speak. In no uncertain words he laid out a forceful argument for how this bill would not only hurt transgender people but businesses as well, by opening them up to liability were they to try to implement the undefined and unenforceable “biological sex” standard the bill would have permitted. We knew that business concerns were high on legislators’ minds, and we wanted to alleviate any concerns right off the bat.

Representative Fredette, the main sponsor of the bill, stood up next to speak, and he took a familiar conciliatory stance. “Why can’t we find consensus on this? No rights can be absolute. I am just trying to find consensus between two legitimate interests,” he argued. These are hard arguments to counter, because they sound reasonable and not bigoted.

But Representative Priest shared a story that showed the lie in Fredette’s arguments. He told about how he grew up in the segregated South, where school dances were segregated between white and black children, and how when the courts finally ordered integration, people were so uncomfortable with the idea that they ended the dances entirely. But, we don’t have that luxury with bathrooms, he reminded us. Everyone has to use the bathroom. And yes, people may feel uncomfortable sharing a bathroom with someone they perceive to be transgender, just as some white people felt uncomfortable attending a dance with black students. But, isn’t that the purpose of anti-discrimination laws – to change our society’s acceptance of difference through education and experience?

Representative Priest’s argument was spot on.

Finally, it was time for the vote. The vote board on the wall started lighting up with reds and greens (our side was red), and our lobbyists started noting which legislators we picked up that we didn’t know were on our side, as well as who we had lost. Even though it was looking good, there was no way to know for sure until the final vote count came in: 81 – 61, an amazing margin that included 20 Republican votes with us. Not to mention, not one Representative spoke in favor of the bill other than the lead sponsor. While the bill would still have to be voted on in the Senate, it was now a foregone conclusion that it was dead.

After the vote, we went down to the entrance of the chambers to thank our supporters. I first made sure to thank the incredible Democratic Minority Leader, Emily Cain. Cain had spoken emotionally, from personal knowledge, about our client, the Orono transgender student who in the last few weeks had bravely put herself out there and lobbied countless legislators, opening their eyes to the reality of transgender children for the first time. It is no overstatement that we owe much of our success to this amazing girl.

I also had the pleasure of thanking Representative Knight, one of the 20 Republicans who voted with us. Here was a representative who was not on our side when it came to LGB rights, but could not have been more forceful about the importance of transgender rights. As Representative Knight described in his floor remarks, his transformational moment came from reading Jennifer Boylan’s book, She’s Not There, and then meeting her through our coalition’s lobbying efforts. By the end of his educational process, he was one of our strongest champions and enormously helpful in persuading so many of his Republican colleagues. As I thanked him for his leadership, it was a wonderful reminder that while it may seem impossible to change the minds of our most ardent opponents, you never know for sure until you talk with them first.

Weary but exhilarated, I made it home around 2 am (thanks to 3 diet cokes on the way!), only to return to the office for a 9 am conference call with transgender leaders in NH about how to build a statewide transgender advocacy and support organization that could hopefully bring NH as far as Maine has come. While on that call, we got word that the Maine Senate was now voting on LD 1046, and watching online, I saw that final vote, 23-11, against the bill. Victory, again, and now the bill was officially dead.

It is hard to overstate what an enormous victory this was for the transgender community – to tackle head on one of the most difficult issues that opponents of transgender rights have used against us, in an entirely Republican-controlled state legislature. It won’t be our last battle, but hopefully, it will be the first of many victories to come as we learn from experience the most effective strategies and arguments in support of the fundamental human right that we all share to be treated with dignity and respect – including in restrooms.
Posted by GLAD at 2:54 PM