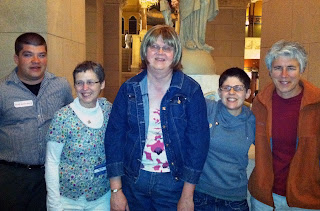 I was driving home from services at our temple last Friday night at nearly 10 p.m. when my cell phone rang. The call was coming from “860,” which I knew was Connecticut. I couldn’t easily imagine who would be calling me at that hour. I was 3 days into a 28-day cleanse, my 8 year-olds’ Little League team got creamed earlier that evening, Friday night services had run late, and I was wishing I was already in bed by now. If I had been, I might not have even answered the phone call. But I did, and barely recognized the voice on the other end which said simply, “They’re running the bill tonight.” “Who is it?” I asked.

“It’s me, Jerimarie,” said the voice. “Betty just called. The Senate is running the bill tonight. Do you think you can make it?”

Without thinking, I answered, “Of course. I’ll be there as soon as I can.”

I could hardly believe that the moment for which I’d waited nearly six years had arrived. H.B. 6599, Connecticut’s transgender civil rights bill, had passed the House of Representatives nearly two weeks ago and I’d been waiting impatiently for it to be run in the Senate. But each time I e-mailed Betty Gallo, our staunch lobbyist who’s been tirelessly working this bill for years, there was little to report. I sent her a short e-mail earlier in the day asking, “Any info on timing?” She quickly replied, “No.” Honestly, I wasn’t even thinking about the bill when I left work that afternoon for my son’s baseball game. But when the call came from Jerimarie Liesegang, head of the Connecticut Transgender Advocacy Coalition (also a visionary, tireless and devoted advocate), I knew I needed to get there quickly.

I arrived at the State House in Hartford just after 11 p.m. and bolted up to the Senate Gallery on the top floor. I had just gotten a text from Sally Tamarkin, the head of CtEquality, the coalition (of which GLAD was a part) that lead the fight to pass the bill: “Bathroom amendment fails 21-15,” it said. One amendment down, I thought. Only six or seven more to go. I knew it could be a very long night, but I was just happy our moment had arrived.

I was nervous. Very nervous. The radical right had amped up its opposition, putting out robo-calls to rally conservatives to contact our Senate supporters and weaken their resolve. They were doing all they could to prevent us from passing statewide protections for transgender people in Connecticut. And, though I had been very hopeful after the bill passed the House (which I thought would be the tougher of the two chambers), I started to doubt that this would be our year. In my heart, I feared that if we couldn’t get it done this year (with such tremendous support from Gov. Dannel Malloy), we might never be able to.

Entering the Senate Gallery, it felt great to see Sally, Jerimarie, and other CtEquality members like Gretchen Raffa and Diana Lombardi. Along with so many others, we had put so much time, effort, and sweat into passing H.B. 6599. I suddenly felt invigorated even as the clock hit midnight and Senators began to say “Good morning, Madame Chair,” in contrast to “Good evening, Madame Chair,” when they began their remarks. Suddenly I saw Sen. Beth Bye of West Hartford, rise to address the chamber. She spoke poignantly of her own educational journey on trans issues and this bill. She recalled attending a panel discussion where three transgender people shared their personal stories, about how moved she had been, and how essential she knew these protections to be. Sen. Bye was so thoughtful and persuasive, I wondered how anyone could vote against this bill.

Still, there were amendments to be voted on, all of them aimed at weakening support for the bill. We’d defeated an exclusion for protections for transgender people in bathrooms (15-21), an exemption for teachers from protections under the law (16-20), an enhancement for criminal penalties for someone who falsifies their gender identity, whatever that might mean (14-20), an even broader public accommodations exception (15-19), and were now listening to support for an amendment that would require transgender people to have the fact of their being transgender noted on their driver’s licenses (eventually defeated 8-26). The oppositions’ floor statements began to feel rehearsed and hollow. I dared to hope that we had the votes and would actually see this thing pass.

Suddenly, Majority Leader Martin Looney was speaking. I knew we were close to a vote. The bells rang and senators were called over the loudspeakers to return to the chamber for a final vote on H.B. 6599. It was almost 1 a.m. One by one, the Senators voted and I counted the red and green dots on the board. There were 36 Senators voting. Finally, I saw 19 green dots. That’s all we needed.

We had finally done it. I could hardly believe this moment had arrived, and that I was there to witness this historic vote. The clerk called out the final vote 20 in favor, 16 opposed. A short but loud scream of joy came from behind me.

Connecticut’s transgender residents will finally have the full protections of the state’s anti-discrimination laws once Gov. Malloy signs the bill, as he has already promised. Needless to say, I’m really glad I answered my phone.