Broadening and Embracing the LGBT Family 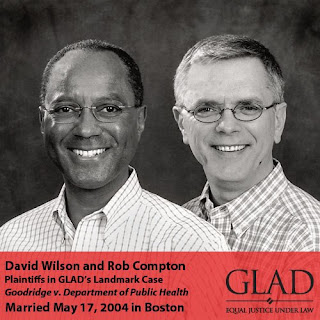 David Wilson, together with his husband Rob Compton, was a plaintiff in GLAD’s 2003 case Goodridge v. Department of Public Health, which made Massachusetts the first state where same-sex couples could marry. Since that experience, he has committed his time and resources to the movement for LGBT equality, and particularly to working within the movement to increase outreach to people of color, combat institutional racism, and broaden and diversify who is embraced by and feels a part of the LGBT family.

And family is what it’s all about for David.  He was in Washington D.C. last week for the two days of Supreme Court arguments on marriage equality and the Defense of Marriage Act (DOMA). When we sat down to talk about that experience, however, he started with a different story, about his granddaughter.

David was a keynote speaker at the 2013 GLSEN Massachusetts Conference last weekend, and when his granddaughter Ruby, a high school student, learned about the engagement she not only asked to attend but wanted to speak. At the conference, she shared a story about a classmate who came out to her as transgender two years ago and how she immediately jumped into action as an ally, encouraging the student and asking what she could do to help him feel supported at school.   She was a key player in helping fellow students understand the transition and ensuring that they use the right pronouns and be respectful of his privacy.

Her awareness as an ally, David pointed out, stemmed from her upbringing in a family headed by a gay couple (between them, David and Rob have five adult children from prior marriages, and seven grandchildren) and absorbing the joys and difficulties that LGBT people face through the experiences of her own family. Years and years of LGBT people forming families, he said, has led to entire families – like his and Rob’s – that are standing up to share their stories and join the movement for LGBT equality.

David calls this phenomenon “broadening the diversity and inclusion of the team” -- expanding the LGBT family to better represent the diversity of our community and the diversity of our issues.  That’s precisely what was on his mind as he attended the Supreme Court arguments in the Windsor case, and when he spoke at a rally on the courthouse steps last week.

“I was there [in DC] to figure out how a ‘win’ will impact people on the ground, especially people of color, transgender people, people outside the movement, people who don’t feel the movement is for them,” David explained. “As a plaintiff in the first winning marriage case, I’ve had a lot of privilege.  How can I make sure I take the access I’ve had, and translate it to others?  I’ve been at the forefront of this fight. What about the people left out or left behind?”

His concern for “the people left out” was only heightened when he finally got into the courtroom to hear a portion of the Windsor DOMA argument after a lucky opening happened for the last thirty people who were expected to stay 3 to 5 minutes but actually stayed 15 minutes until the ending statements. Once inside, David found himself thinking, ‘Where’s the diversity in this room?’ To my mind, it wasn’t there. There was certainly diversity among the nine justices but it did not appear to be present  in the rest of the room.”

It was a marked contrast to the exuberant scene outside the Supreme Court doors, where a throng of LGBT protesters and various supporters of the freedom to marry gathered to make their voices heard. “The rally outside the Court was real,” said David. “The speakers, and the people gathered around were very excited, proud and connected.  It was a really diverse crowd.”

“But then the people coming down the steps from the Court didn’t reflect the people at the rally,” he added. “And there I was, coming out of the Court feeling so proud but disconnected from the folks gathered at the bottom of the steps of the Supreme Court”

Prior to going into the court, David received a warm welcome when he stepped to the microphone at the rally. “I think the organizers and the people gathered were excited to see a man of color, someone with gray hair, someone who has had long range involvement in this movement,” said David. “I felt incredibly welcomed, appreciated and valued.”  Once the crowd recognized me as one of the earlier speakers, they were so happy and proud that I had been granted access as one of them.

He wants other members of the LGBT family to feel that same embrace, even if they feel the marriage movement doesn’t speak to them.  Justice Elena Kagan gave him a way to do that during the DOMA argument when she quoted a passage from the House Judiciary Committee’s report on DOMA, in which the committee concluded that by passing DOMA, “Congress decided to reflect and honor collective moral judgment and to express moral disapproval of homosexuality.”

That’s when it dawned on David that a win in Windsor would not just provide married same-sex couples with federal equality in marriage, it could also potentially strike a blow to the many other laws that have been enacted out of moral disapproval of LGBT lives, affecting a much broader swath of our community.

“When Justice Kagan read the morality piece I really understood,” said David. “I thought, okay, when I leave this room, leave Washington, what can I do to make this more real?  How can I show people that this will impact you, too?  How can I translate this to the Black Church, to seniors, to kids of color?"