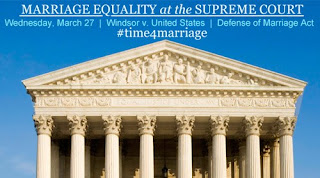 Post by Carisa Cunningham, Director of Public Affairs and Education

Inside the Supreme Court on Monday and Tuesday it was all blue suits, “may it please the Court”, legal arguments, and tradition.  Outside the court was a very different and yet also very American scene.
Wandering around connecting our side’s people with reporters, I was invigorated by the variety of expression and sheer joy of equality supporters.  What’s not to love about signs like “If God hates gay people, then why are they so cute?” and “Nature Digs Homosexuality: Scientists for Equal Rights”?  In addition to scientists, there were labor unionists, inter-racial (straight) couples, African-American ministers, military members, kids and grandparents, civil rights leaders, people from north, south, east, and west, all supporting equality under the law for gay people.

The other side cornered the market in mixed messages:  we had the Westboro Baptist Church singing “Another One Bites the Dust” – by Queen; and men in skirts (okay, kilts) in an anti-equality marching band.

I ran into our wonderful plaintiffs Melba Abreu and Beatrice Hernandez, as well as Bette Jo Green and Jo Ann Whitehead, and Goodridge plaintiff David Wilson spoke to the crowd on the second day.  The media was both penned up below the Supreme Court steps, and set up on the plaza to talk to lawyers and plaintiffs immediately following argument.  Both days, the first person out the building was Jeffrey Toobin of CNN, who headed straight for his camera and immediately started talking. 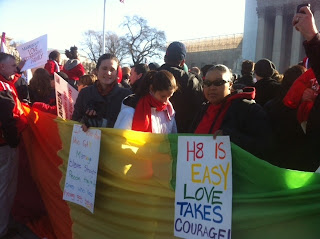 It was incredibly moving to see Edie Windsor, in her bright pink scarf, waving to the crowd, which lovingly cheered her.  And it was satisfying to see GLAD’s Mary Bonauto share her wisdom with everyone from ABC News to members of the community who stopped her on the street.

Kudos go to all of the organizers, and all who showed up, whether organized or disorganized.  No matter what the legal outcome, these two days were a true expression of what Martin Luther King, Jr., called “the beloved community.”  He said, “But the end is reconciliation; the end is redemption; the end is the creation of the beloved community. It is this type of spirit and this type of love that can transform opposers into friends. It is this type of understanding goodwill that will transform the deep gloom of the old age into the exuberant gladness of the new age. It is this love which will bring about miracles in the hearts of men.”
Posted by GLAD at 9:00 AM