What a Day it Was: Stepping Up for Equal Rights 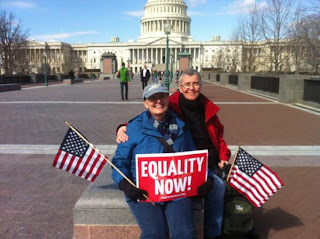 Jo Ann Whitehead (right) and Bette Jo Green, plaintiffs in GLAD's challenge to DOMA, Gill v. OPM, were in Washington D.C. last week for the rallies outside the Supreme Court. They share their experiences below.

And now we step up for our rights under the law of the land.  Bette Jo and I are happy we went to DC last week to stand outside SCOTUS during the morning rallies on Tuesday, March 26 (prop 8) and Wednesday, March 27 (DOMA):

The weather was cold, but the fervor for equality warmed us deeply.  The size of the supportive rally crowd took our breath away; it felt like a cold-weather Gay Pride Day.  As the rally formed, we were cheek-to-jowl, able to move slowly through the flux of the crowd; this was a great opportunity to strike up conversations and make new “instant friends.”  There was a mix of young, old, lgbt, straight, racially and culturally diverse, businesses, political groups, and religious groups.  When the religious leaders (representing about every denomination you can think of) came from the prayer breakfast and walked through the crowd to the speakers’ area singing “this little light” it sparked a joyous sing-along.

Fortunately, we were a distance from the “opposition” and the “must-hate” groups who were there, but they were much smaller numbers than the waves of support; some of their signs and banners were confusing, some were downright nasty (tradition, marriage, property; [swastika]; god hates fags).

From our vantage point we enjoyed the bountiful upbeat, colorful, and supportive signs and banners, some homemade and some provided by the rally organizers:  (Jesus had two dads and he turned out fine; guys, I said I hate figs; if God hates gay people, why are they so cute?; in case you’re confused [the rainbow flag] isn’t a white flag).

Tuesday morning early we were on our way.  The Metro was humming with folks in suits carrying  briefcases, getting on and off, until we arrived at our stop: Capitol South.  We emerged into the crisp air, greeted by volunteers in red t-shirts and vests, giving us directions to the Supreme Court building, along with placards and smiles.  Our placards read “Marriage is Love Commitment Family” and we noticed more and more warmly dressed placard-carrying folks going in the same direction.  Then we joined the throng – bright colors, lots of laughter, hand-printed signs, rainbow flags – and tried to get as close to the front steps as possible.  People stood in the visitor line for the hearing, but many more were just like us making their way past the cameras and reporters to celebrate this historic moment together:  the Supreme Court of the United States (SCOTUS) taking on gay marriage and gay marriage rights.  I shivered when I saw EQUAL JUSTICE UNDER LAW inscribed on the building.  Could that also apply to us?
The cold wind on this sunny day didn’t seem to matter so much in such a sea of humanity.  We were huddled close together, jostling, saying “excuse me” so many times that we started talking about the day, learning each other’s stories, laughing as each new sign went by, chanting, singing, applauding the speakers, thanking the volunteers for all their efforts.  We were a sea of color:  rainbow and American flags, scarves, mittens, hats, and skin tone with the musical interludes keeping us hopping.  A large contingent of ecumenical clergy wound their way through the crowd singing “This Little Light of Mine, I’m Going to Let it Shine” drawing us all in.  And the speakers from near and far gave us inspiration from their personal stories and their support of the LGBT community.  We left many hours later, only after our numb feet couldn’t hold us up any more.   We needed energy for the next day.
Wednesday morning we were old timers, not only in age, but in experience.  We knew the route, the stop, the way and came even earlier to the front steps of SCOTUS.  This time we introduced ourselves to the folks around us who came from Virginia, Maryland, California, etc.  Gay, straight, young, old, black, white – all energetic, all with stories to tell.  The placards read “Equality Now” and multitudes of American flags joined the handmade signs, each person with a wider grin than the last.  By this time our cheeks hurt from smiling so much.  We talked with each other about the joys of commitment and our families and the weather and how good it felt to be here.  It was amazing to realize that each of us in that vast crowd had a story to tell if we would take the time to listen.  And we cheered for Edie Windsor and her legal team when she emerged from the SCOTUS building.  By that time we were happily ensconced indoors watching her on TV.
What a good day it was.
Posted by GLAD at 12:30 PM