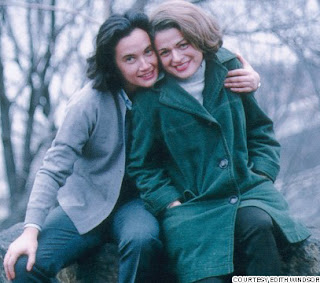 GLAD Public Affairs and Education Intern Adam Connito was in D.C. on March 27 to watch his aunt sworn in before the U.S. Supreme Court, and was able stay for the arguments in Windsor v. United States. He shares his reflections - written in the airport on his return flight to Boston - on witnessing the historic deliberations on behalf of Edie Windsor (pictured above with her late wife Thea Spyer) and tens of thousands of others impacted by DOMA.


Airports are a good place to reflect. Something about leaving one place for another – maybe it’s the anticipation of movement, progress, and destination. It’s nice to think about where you were before you get to where you’re going, and I can’t shake the thought of serendipity when I consider that my first trip to D.C. included a visit to the nation’s highest court to hear oral arguments in Windsor v. United States.


Who was I, a twenty-five year old intern with zero credentials, to bypass the endless lines of frigid onlookers, some of whom had poured decades of grueling time and energy into this effort? I was invited as a guest to see my aunt sworn in before the court, but surely I didn't deserve to walk these cavernous halls on this day. Besides, up until Tuesday my understanding of the Capital was a reduced catalogue of images, video-clips and sound-bites from cable news networks – a collage of important monuments filled with monumentally important people. It’s easy to forget that those buildings are nested in the heart of a city full of ordinary people and everyday stories.

And so it was inside the Supreme Court on March 27th, a case of momentous stature resonating throughout a marble-columned room packed with linoleum lives. The fate of tens of thousands of American families cupped in the hands of nine justices.
I’ll leave it to the pundits and experts to parse through lines of questioning and analyze possible outcomes. I won’t pretend to comprehend the complexity of constitutional law or the intricacies of our justice system. But standing six feet small beneath the ornately patterned ceiling, between the grand pillars and long velvet drapes so drenched in history if you wrung them out you could fill an ocean, I couldn’t help but think of my married friends back in Boston. While they were not as privileged as I to bear witness to Windsor unfolding at the highest court, I sensed their presence in the room. Because after all the arguments are laid out clearly before the world, when the gavels have gone silent and the sound of media coverage has faded, with each right and responsibility weighed and every brief accounted for, the only thing left at the core of this issue is people. People in love.
As politicians keep jumping ship from the sinking moral minority and the currents of change continue to carry us towards a more perfect union, let us not forget where this all began. It started with those little heart palpitations that grew heavier with every touch until they blossomed into a lifetime of memories built upon the simple, unyielding promise of forever and always. That’s what this is about. Ordinary people and everyday stories, stories from the book of love, and whether or not the Federal Government will acknowledge the person waiting anxiously with flowers at the landing gate.
Time to catch my flight.
Posted by GLAD at 4:30 PM

Adam, i heard Amanda praising your writing, but didnt know until now what she was referring to. That was beautiful and so powerful. Thank you for sharing that experience. I am so moved by how you captured it. I, for one, am so glad it was you who was there!